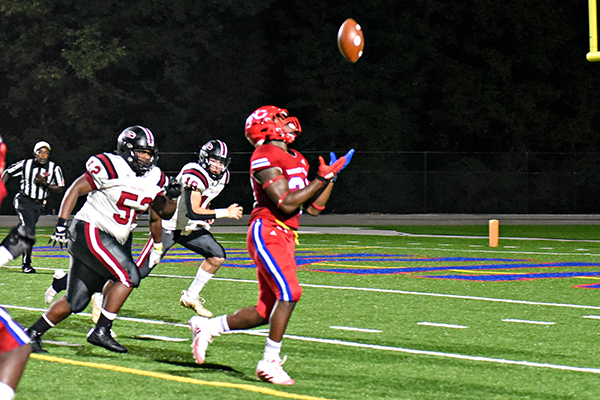 Warren Central defensive end Taylen Smith (33) intercepts a pass against Germantown. Smith returned it for his second touchdown of the season as the Vikings won 23-10. (Cedric Tillman/Vicksburg Warren School District)

Every great player has a signature move, whether it’s a shifty juke by a running back, a bone-crunching hit by a linebacker or a high-arcing deep ball thrown by a quarterback.

In the fourth quarter of Warren Central’s 23-10 win over Germantown last Friday, the senior defensive end batted a pass in the air, caught it, and ran into the end zone for a critical touchdown. It’s the second time this season he has had a pick-six, after scoring on a nearly identical play two weeks earlier against Brandon.

Although it looks like a unique play on the surface, it’s one that Smith said he works on all the time in practice. He also looks for opportunities to pull it off in games.

“Every day. Any time we can get passes like that, you can impact a play. And any time you can impact a play, it’s good for us,” said Smith, who also had six tackles and two sacks against Germantown. “Coach talks about it all the time, get your hands up in practice. When we watched film, we realized how low they were throwing the ball. I could have had one earlier, but it didn’t come to me to put my hands up. This time I told my coach if they do it, I’ve got it. We work on it all the time, and everything is coming together as a team.”

Adding the ability to intercept passes to his skillset is making Smith an even more dangerous player than he already was.

He totaled 50 tackles, including 18 for loss, and a team-high six sacks in 2019, and also forced two fumbles. In four games this season, he already has 28 tackles, six tackles for loss and four sacks. His two interceptions are tied with cornerback Tevin Bell for the team lead.

Bell got both of his picks against Germantown on more traditional plays. Smith got his by batting passes high into the air at the line of scrimmage, breaking off a block while tracking the ball, and then catching it as it came down. Smith was then able to gain separation and find his way into the end zone for a 29-yard touchdown return in the 23-3 win over Brandon — which he finished with a forward flip across the goal line — and a 7-yard TD against Germantown.

“We work on it a lot, along with a lot of other things,” Warren Central head coach Josh Morgan said. “Taylen has played a lot of football and has a very high football I.Q., and it’s showing. That’s not easy, and he’s done it twice already.”

Smith’s performance during the first half of the season has been a big part of Warren Central’s 4-0 start. The Vikings’ defense has allowed three touchdowns in four games, and only one of its four opponents has scored more than 10 points.

The dominant defense has become the team’s biggest strength, and it will need to keep playing well as the pressure of the Region 2-6A schedule intensifies.

Warren Central will not play this Friday night, but will pick up a forfeit win over Greenville. Greenville originally opted not to play football this season because of COVID-19 concerns, but recently announced it would play a limited schedule of non-region games.

After the open date, Warren Central has a huge game against perennial nemesis Madison Central (3-1, 1-0 Region 2-6A) next week, as well as dates with Clinton, No. 1 Starkville and No. 4 South Panola down the stretch.

The difficulty of the schedule made the win over Germantown that much more important, Smith said.

“We’ve been talking about how this game defines the rest of our season,” Smith said after beating Germantown. “If we lost this game, we were going to be struggling throughout the season. It just feels good to win it with my boys, and now we’re on top.”