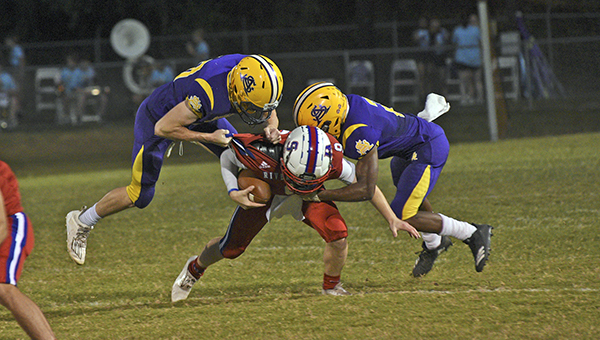 There comes a point in every season where its path becomes evident and the goals shift, from dreaming of championships to scrambling for scraps of success.

The St. Aloysius Flashes might not be there just yet — they are still mathematically alive for the MAIS Class 5A playoffs — but with each passing week, the dreams of summer are starting to fade into the cold realities of autumn.

St. Al (2-4, 1-1 MAIS District 3-5A) has lost three consecutive games, and its chances of salvaging some tangible success are running out as the final month of the season begins Friday night at home against Silliman (1-1, 0-1).

“I don’t know, statistically speaking,” St. Al coach Stacy Sizemore said of the Flashes’ playoff chances. “But really, we’re just focused on us and building a foundation we can build on for next year. We want to have success because you want to keep the kids involved, and we need to have some success to get them excited and get their spirits up.”

St. Al’s two wins have both been forfeits. Hartfield Academy forfeited its season-opening 43-0 win over the Flashes for using an ineligible player, and Central Hinds a district game because of a COVID-19 outbreak at the school.

The two victories have put St. Al on the fringes of the Class 5A playoff picture. Twelve of the 17 teams in Class 5A qualify based on the MAIS power points system, and St. Al is currently ranked 13th. Silliman is 12th, so a win on Friday night could put St. Al in contention.

On the field, however, the Flashes have struggled mightily. They’ve been shut out three times, including a 31-0 loss at Copiah Academy last week, and scored 12 points in five games. Sizemore said a combination of factors, from his team’s own youth to a difficult schedule, have contributed to the struggles. Several opponents have been bolstered by transfers from public schools that opted not to play football this season because of COVID-19 concerns.

“It gets to the point where you’re playing for personal pride and for each other. We’re focused on us and not who we’re playing, and trying to build this program,” Sizemore said. “Every week we take the field, we’ve been overmatched. It’s one of those years that may never happen again.”

For all of its on-field struggles, St. Al’s playoff hopes are not dead yet and Friday’s game against Silliman is a chance to keep them alive.

Silliman, which is located in Louisiana, did not play a game until Sept. 18 because of its state’s COVID-19 restrictions. The Wildcats are a traditionally strong team — they won the District 3-5A championship last season — but have only played two games. Sizemore hopes that means they are a step behind in their development and conditioning, and perhaps ripe for an upset.

“From a standpoint of offensive timing, conditioning, just getting into game shape, they’re probably not there yet,” Sizemore said. “It’s like coming off a bye week, where you get going and then take a week off and now you have to find that gear again. They have to get used to the speed of the game, and they’re two weeks behind everybody else.”