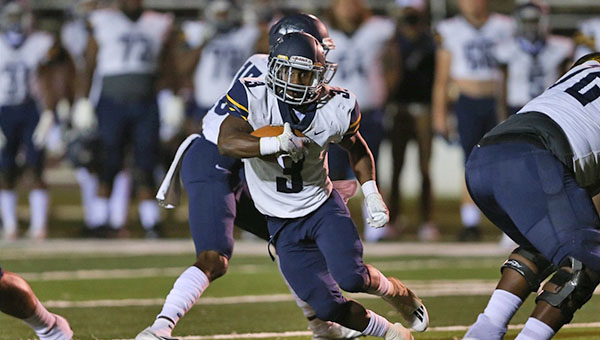 Mississippi Gulf Coast running back Deondre House ran for a career-best 220 yards and one touchdown, and the defending national champion Bulldogs piled up 649 yards in total offense on the way to a 42-25 win Thursday over Pearl River Community College.

Gulf Coast ran for 344 yards and held the Wildcats to only 53 on the ground. The Bulldogs have won 17 straight games, the third-longest winning streak in school history.

“It feels good because 1-0 is always a good start,” Gulf Coast coach Jack Wright said. “It’s not the situation that we thought we would get it in. Typically, Pearl River is a middle-of-the-season game as a division game. Coming out against these guys was tough. I’m proud of our kids.”

Pearl River was able to throw for 275 yards with several big plays. Jakob Greer hit Chris Holifield Jr. for a 68-yard touchdown pass on the Wildcats’ first play from scrimmage.

Greer finished 13-of-26 passing for 125 yards, and Austin Davidson was 13-of-25 for 150 yards.
Gulf Coast will host Hinds Community College next week. Hinds was idle on Thursday night while the rest of the Mississippi Association of Community Colleges Conference teams started their seasons.

Jones 34, East Central 5
Jones College scored two touchdowns in less than a minute late in the second quarter Thursday night and went on to rout East Central Community College in the season opener for both teams.

Leading 10-3, the Bobcats got a 50-yard touchdown run by freshman Romal Webb with 4:26 left in the first half. Seconds later, Hershey McLaurin recovered a fumble and returned it 27 yards for a score to make it 24-3. Sophomore quarterback Quaterius Hawkins completed 16 of 25 passes for 226 yards and one touchdown for Jones. Webb ended the game with 112 rushing yards and two touchdowns on 11 carries.

Markel McLaurin had six catches for 120 yards and a score, and Bud Tolbert had six receptions for 95 yards for the Bobcats.

Hershey McLaurin also had an interception and three tackles to go with his fumble return TD.

Wallace’s 70-yard TD pass to Von Hill tied the game at 23 with 12 seconds left in the third quarter, and then Wallace connected with Kobee Lockett for another TD in the fourth quarter to put Coahoma ahead for good.

Jackson’s second touchdown of the game later in the fourth quarter sealed it.
Noah Sisk kicked two field goals for Coahoma and was 4-for-5 on PATs.
Qua Smith threw two touchdown passes and ran for a third score for Itawamba.