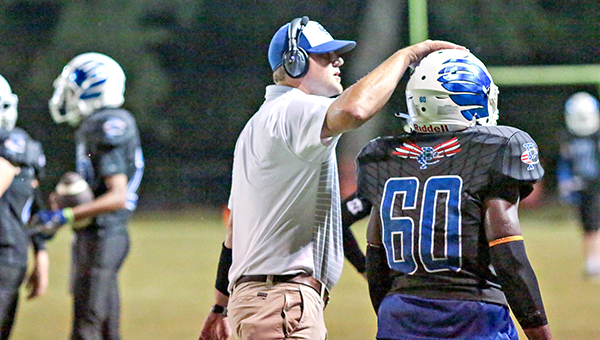 Tuesday morning, while running between classes and other appointments, Porter’s Chapel Academy football coach Blake Purvis had to stop and take a few minutes to deal with other matters

Several parents had come to the school’s office trying to secure blocks of tickets for this week’s homecoming game against New Orleans Home School. It wouldn’t be an issue in most years, but with attendance still limited because of COVID-19 restrictions the tickets have become a hot commodity among PCA’s fans. Purvis, who is also PCA’s athletics director, is in charge of making sure everyone gets their fair number.

It was a minor task that was handled in a few minutes, but just a small sample of one of the challenges PCA is facing this week. Riding a two-game losing streak, Purvis said, it was crucial for the Eagles to put aside the plentiful side shows and distractions of homecoming week if they want to get back into the win column.

“You’ve got to really harp on the focus. Where we’re at in the stage of our program, focus is huge for us in whether we’re able to be successful or not,” Purvis said. “We’ve improved a lot and we have the potential to be successful, but we’re not at a level where we can do it with a lack of focus and making mistakes. Homecoming week obviously adds a lot of distractions. There’s a ton of stuff going on this week. So focus is going to be even more crucial in a week like this.”

This homecoming game does not count toward PCA’s average in the MAIS power point rankings that determine playoff berths and seeding — New Orleans Home School is not an MAIS member — but is still a pivotal one on the schedule.

A run of three consecutive District 4-3A games follows this one, and the three opponents have a combined record of 12-4 at the midway point. Two of those four losses were to other teams in the district.

PCA has also been outscored 97-22 in its last two games. The losses to Hillcrest Christian and Centreville Academy followed a three-game winning streak that was the program’s longest in seven years. Getting a win this week to end the losing streak and bridge the gap into the district schedule was important, Purvis said.

“It definitely is a chance to get back on track after two down weeks and gain some momentum going into our district schedule,” Purvis said. “We’re still as much in the hunt as anybody in the district at this point because we haven’t played a district game. Gaining momentum and having a good showing Friday night, and getting back to a successful outcome definitely should help us moving forward.”

Purvis added that, despite losing 46-16 to Centreville last Friday, he was still pleased with his team’s effort and its response to the loss. The Eagles passed for more than 100 yards and had a handful of big plays, but simply weren’t able to keep up with a talented Centreville team.

“From last week, we’ve got stuff to build off of. The result of the game was what it was, but we did some things well,” Purvis said. “We played a physical football game. We didn’t play mistake-free, but we did enough things that we can build off of that and take some positives off of that, and I think we did (Monday) in practice.”