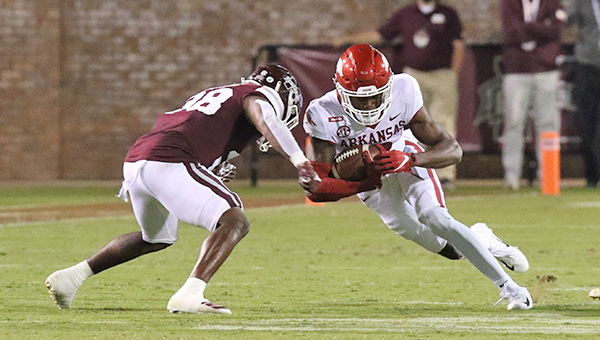 Arkansas had not won an SEC game since beating Ole Miss on Oct. 28, 2017. That was two coaches ago for the Razorbacks, who are in their first year under Sam Pittman.

A week after a record-breaking and stunning road upset against LSU, the Bulldogs (1-1) and new coach Mike Leach hardly looked like the same team. Costello was 43-of-59 passing for 313 yards and one touchdown. Costello and the Air Raid shredded LSU for an SEC-record 623 yards passing, but the Bulldogs turned the ball over on downs in the red zone twice in the fourth quarter and also lost a fumble against Arkansas.

Greg Brooks Jr. returned an interception 69 yards for a touchdown to put Arkansas (1-1) on top early and the Razorbacks led 14-7 at the half.

Arkansas managed only 275 yards of total offense and 24 minutes of possession. That turned out to be enough.

Franks was 20-of-28 for 212 yards. DeVion Warren caught four passes for 100 yards and one touchdown, a 19-yard reception in the second quarter that gave the Razorbacks the lead for good. Franks connected with Hudson Henry on a 12-yard TD pass early in the third quarter to extend the lead to 21-7.

Mississippi State’s Dillon Johnson scored on a 6-yard run with 3:50 remaining to cut it to 21-14, but that was as close as the Bulldogs got. Four fourth-quarter possessions ended with an interception, a three-and-outs, and two turnovers on downs inside the red zone.

Mississippi State had one last chance to get the ball back and drive for the tying score after forcing a punt with less than three minutes remaining. Returnman Jaden Walley muffed the punt at the 36-yard line and Arkansas recovered. The Razorbacks were able to bleed more than two minutes off the clock before punting back to MSU with 25 seconds remaining. Costello completed three short passes on the Bulldogs’ final drive, but the last one only reached the MSU 27-yard line as time expired.

LSU bounces back by crushing Vanderbilt

NASHVILLE, Tenn. (AP) — LSU proved its could protect its quarterback, and Myles Brennan showed what he could do with... read more