Neshoba Central pulls away from Vicksburg 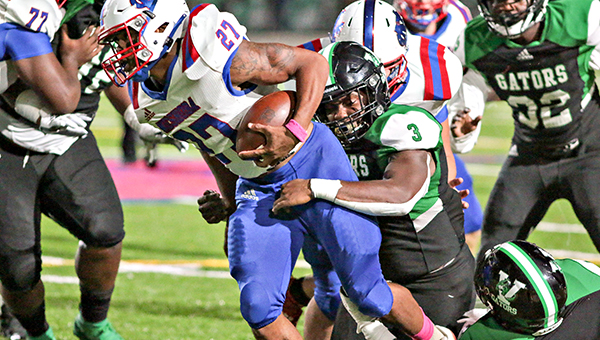 There was no miraculous comeback for the Vicksburg Gators this time, no fantastic finish. Just a loss and, head coach Todd McDaniel hopes, a hard lesson learned.

Jarquez Hunter ran for 218 yards and three touchdowns, and Neshoba Central scored on five of its seven second-half possessions to beat Vicksburg 34-6 on Friday night.

We just have to figure this out. We have to understand that we can’t just talk it,” McDaniel said. “And we have to understand that when we play people of this caliber, it’s four quarters. It’s a grind-it-out type of game. And then the next thing is that we figured out what the weight room was about tonight, and how important it is to get in the weight room and hit that iron.”

The Gators (1-4, 0-1 MHSAA Region 2-5A) went into halftime locked in a scoreless tie with the No. 3-ranked team in MHSAA Class 5A, but mistakes and a steady stream of penalties spoiled a potential upset bid. Vicksburg was penalized 12 times for 112 yards in the game, including eight times for 71 yards in the fourth quarter alone.

It was also called for six personal fouls and had two players ejected.

Neshoba Central (5-0, 2-0) was flagged for two personal fouls, and was not without penalty issues of its own. Hunter had a punt return touchdown negated by an illegal block in the second quarter, and a couple of long runs were wiped out by holding penalties.

Neshoba, though, was able to overcome its mistakes in the second half. On the first play of the third quarter, Hunter ripped off a 38-yard run. On the second, he went 18 yards for a touchdown and the first points of the game.

Hunter added a 6-yard TD on Neshoba’s next possession to make it 14-0 with 4:31 left in the third quarter.

“We had some setbacks with the referees, but we didn’t let it transfer over to the second half. We came out and put it in the end zone and let (Hunter) do his thing,” said Neshoba Central quarterback Eli Anderson, who scored two rushing touchdowns. The junior started his high school career at Warren Central before transferring in 2019. “We just had to tell them to put (the first half) behind us. That was last half. Roll with it and get going.”

Vicksburg’s defense kept it in the game until a couple of offensive missteps allowed Neshoba to finally blow it open in the fourth quarter.

Freshman quarterback Ronnie Alexander fumbled a snap that was recovered by Neshoba’s Maxton Woodward and returned to the VHS 23-yard line. A personal foul penalty at the end of the play moved the ball to the 8-yard line, and Anderson scored on a 5-yard run two plays — and another personal foul by the Gators — later.

The Gators got a spark of life when Laurence Sullivan ripped off a 73-yard touchdown run midway through the fourth quarter, but the Rockets answered with a five-play scoring drive capped by Anderson’s 4-yard TD run.

Vicksburg rushed for 146 yards in the game, but 130 of that came on Sullivan’s touchdown and a 57-yard burst by Sha’Kori Regan early in the fourth quarter. The Gators had just 13 total yards in the first half.

“(Neshoba) kept playing football. They weren’t talking about it. They were playing physical football,” McDaniel said. “We knew this was going to be this type of game, so we have to get back to the drawing board. This is a process. It doesn’t happen overnight. We did close the gap some. But we want to keep closing the gap. But some of the things I was disappointed in, and we’ve got to straight that out.”