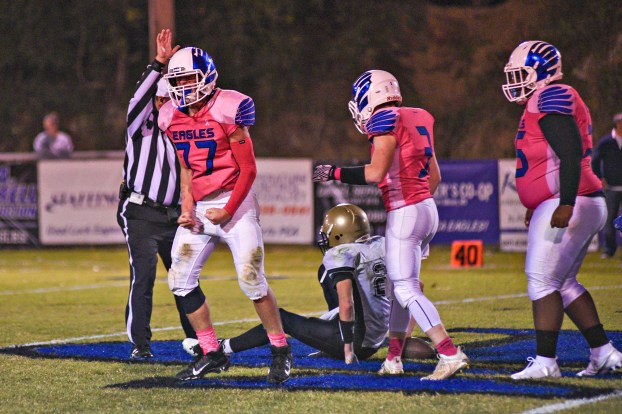 Porter’s Chapel piles up the points in homecoming victory

Homecoming was so much fun at Porter’s Chapel Academy, it didn’t seem to want to end.

Porter’s Chapel weathered an extended homecoming halftime and then a 30-minute delay for a power failure to rush for nearly 500 yards in a 65-34 victory over the New Orleans Home School Saints on Friday.

The two delays, one planned and one unplanned, stretched the game out to nearly four hours in length, and an offensive explosion by both teams did not help. PCA finished with 492 rushing yards and the teams combined for 99 points.

“I thought our guys did well. We came out, played two minutes in the third quarter, and then had to go in for 30 minutes. They adjusted well, kept their focus and took it in stride,” PCA coach Blake Purvis said.

Tyler Washington led PCA’s offensive onslaught with 182 rushing yards and three touchdowns on only five carries. He scored on runs of 14, 90 and 47 yards, and also returned a kickoff 75 yards for a touchdown.

The 65 points that PCA scored came within one of the school record, set in a 66-0 victory over Rebul Academy in 2004. It was the first time the Eagles had scored more than 60 in a game since they beat Russell Christian 62-0 in 2010.

“It’s always fun when you score points. They’ve come at a premium here for a little while, so to have production like that makes it a fun night,” Purvis said. “And to do it the way we did it, with a bunch of different guys getting in the mix, the credit has to go to the offensive line in that scenario.”

Most importantly for the Eagles (4-3), Friday’s victory snapped a two-game losing streak and propelled them into a stretch of three district games to end the regular season. That run begins next week at home vs. Greenville Christian.

“We hope it’s good. Our season starts next week,” Purvis said. “We have three straight district games and we have to figure out how to get it done down the stretch and get into the playoffs. Hopefully this gives us a momentum boost.”

After an extended halftime for homecoming and then the power failure, PCA did its best work as the clock crept toward midnight. Leading 26-20 midway through the third quarter, it scored four touchdowns in a span of about eight minutes — three of them by Kapp.

Kapp, a senior who plays several different positions, caught touchdown passes of 25 and 43 yards, and then returned an interception for a touchdown. The three scores helped stretch PCA’s lead to 51-20 at the end of the third quarter. The eagles cruised home from there.

“That’s the kind of game we’ve been looking for out of him. It was, by far, is best offensive and defensive game of the season,” Purvis said. “He made good adjustments and was in the zone. It snowballed for him in a positive way and allowed us to blow it open.”

After a month wandering in the football desert, the St. Aloysius Flashes found a welcome oasis filled with touchdowns and... read more