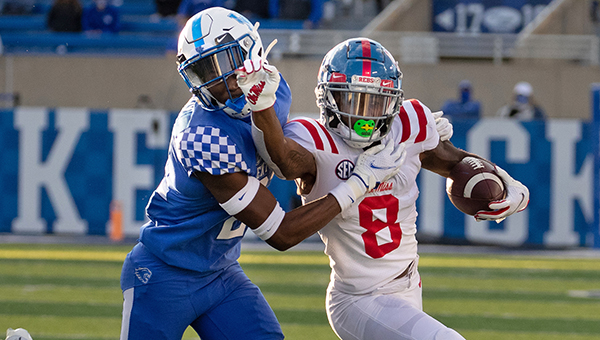 The Rebels quickly rallied and made up ground to lead, then mounted one last rally in overtime before seizing a huge break to earn a hard-fought win.

Chris Rodriguez’s 1-yard run for Kentucky with 2:04 remaining eventually forced OT and Terry Wilson’s 10-yard scoring TD gave the Wildcats the initial lead. But Matt Ruffolo missed the extra point, opening the door for the Rebels (1-1, 1-1 Southeastern Conference) to come back again for the win.

Five-yard runs by Corral and John Rhys Plumlee were followed by a defensive pass interference penalty on Kentucky’s Kelvin Joseph in the end zone to put the ball at the 2. Corral hit Moore two plays later and Logan easily converted the PAT to give Kiffin his first win with the Rebels and spark a wild, joyous celebration.

“Crazy game,” Kiffin said. “To be down like that and to come back and go to overtime. … It was great to see our guys battle back. We didn’t play great in a lot of areas, we stutter on offense for a while and obviously didn’t stop the run.

The Rebels trailed 28-14 early in the third quarter before Corral, who threw four TDs, tossed scoring passes of 24 and 16 yards to Jonathan Mingo to tie the game early in the fourth quarter. The drives covered 75 and 54 yards and just 2:54 combined. After taking over on downs, Ole Miss used just 47 seconds to go 53 yards and go ahead on Snoop Conner’s 1-yard TD run with 8:23 remaining.

Corral completed 24 of 29 passes for 320 yards and four TDs, two to Jonathan Mingo for 24 and 16 yards during the rally and another for 14 yards to tight end Kenny Yeboah in the first half. Corral also rushed 13 times for 51 yards.

“Coming off last week, we had to get that bad taste out of our mouth,” Corral said, referring to a 51-35 loss to No. 5 Florida. “First win under a new coach, he wouldn’t have it any other way and coming out with a win is a great feeling.”

Jerrion Ealy scored from the 1 for Ole Miss on the game-opening drive.

Wilson rushed 22 times for 129 yards and three TDs, while Rodriguez had two touchdowns with 133 yards on 17 carries. A.J. Rose also rushed for 117 yards and a score as the Wildcats (0-2, 0-2) gained 408 yards on the ground. But their defense tired in the second half and Ruffolo’s missed PAT proved costly.

Ole Miss couldn’t stop the run, but it didn’t matter because the passing game was on point when necessary in scoring quickly and wearing down the Wildcats. Most importantly, Logan nailed the critical PATs that eventually made the difference.

Kentucky again controlled the yardage — 559-459 this time — but couldn’t stop the Rebels’ quick pace or Corral after halftime. Ruffolo’s missed 49-yard field goal in the third quarter could have made it a 17-point lead, but instead opened the door for the Rebels to tie. And his missed PAT in overtime obviously hurt.

“We went through some patches where we overcame some adversity, got the game into overtime and to lose it that way is difficult,” Kentucky coach Mark Stoops said. “We have to find ways to execute in critical moments. We did that for a large portion of the night.

“Anytime you rush the ball for 400 yards you usually feel that you’re going to have a good opportunity to win. You have to get stops in critical moments. We did not play very good defense tonight.”

Porter’s Chapel piles up the points in homecoming victory