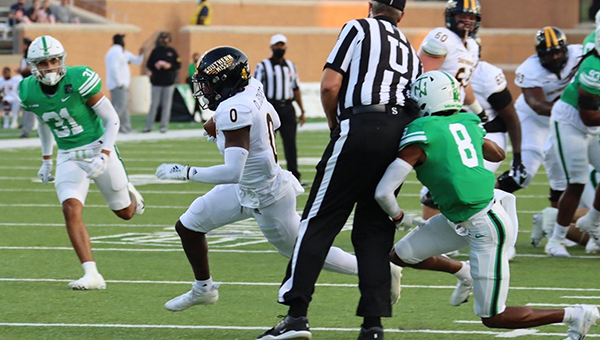 Gore’s 100-yard rushing game was the first of the season for the Golden Eagles. Southern Miss finished with 202 rushing yards. Darius Maberry added 55 yards and two touchdowns. It was only the second time since the start of the 2019 season that Southern Miss has rushed for more than 200 yards as a team.

Abram threw a 22-yard touchdown pass to former Warren Central star Demarcus Jones and Gore ran it in from 11 yards out to give Southern Miss a 14-3 lead in the game’s first 4 1/2 minutes.

Jones had two receptions for 43 yards — including the first touchdown of his college career — and Jason Brownlee caught four passes for 110 yards and a TD. It was Brownlee’s second consecutive 100-yard receiving game, and third in a row with a touchdown. His 68-yard TD reception early in the third quarter gave the Golden Eagles a 27-10 lead.

The Mean Green’s Tre Siggers capped an 80-yard scoring drive with a 1-yard scoring run with 1:54 before halftime. But Southern Miss (1-3, 1-1 Conference USA) drove 46 yards in 70 seconds, and Briggs Bourgeois kicked a 46-yard field goal to put the Golden Eagles up 20-10 at intermission.

Austin Aune threw for 330 yards and two scores for North Texas (1-2, 0-1), which never got closer than 10 points in the second half. DeAndre Torrey had 82 rushing yards and one touchdown, while Deonte Simpson and Jaelon Darden each surpassed the 100-yard receiving mark.

Darden caught a game-high 13 passes for 104 yards and a touchdown, and Simpson had five receptions for 113 yards and a TD.