Sports column: Hunting season is upon us, so send us your photos 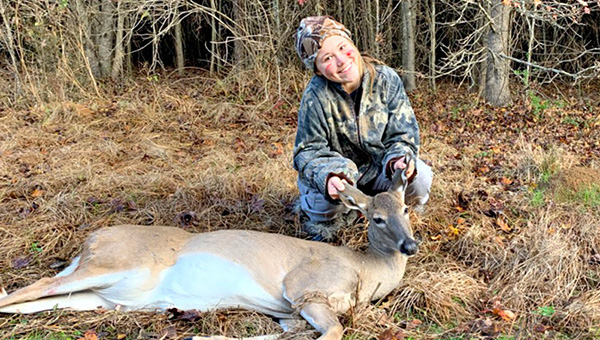 Madeline Lee poses with a deer that she killed in November 2019. As hunting season begins, The Vicksburg Post welcomes its readers to submit photos of their trophies. Please email them to sports@vicksburgpost.com. (Submitted to The Vicksburg Post)

Of all the activities in the world, perhaps none is more suited for the COVID-19 era than hunting.

Social distancing is mandatory. So is being outdoors. Wearing a mask is optional, but helpful. And, on top of it all, it’s a way to temporarily escape the insanity of the past few months.

Hunting season in Mississippi — the deer version, at least — began Thursday when archery season opened. There are eight different times and ways to hunt deer in the state, ranging from bow and arrow to rifles to primitive weapons. Seasons run through the end of January.

I know the latter refers to specific types of firearms, but for me it always conjures up an image of a hunter chasing a deer with a club like some sort of caveman. Maybe the Mississippi Department of Wildlife, Fisheries and Parks can add a season for that next year. But I digress …

One of the long-running traditions here at The Vicksburg Post is running photos of our local hunters and their trophies. We’ve done it since the 1970s, when former reporter Fred Messina was writing our outdoors column, and we have no plans to stop. Over the next few months we hope to get a veritable flood of hunting photos from readers that we will publish both in the paper and on our website.

We welcome all submissions, whether it’s a deer or a string of fish, or a trophy bass. But there are a few ground rules to remind everyone of, so here they are:

• Photos should be emailed to sports@vicksburgpost.com with something along the lines of “hunting photo” in the subject line. We can take hard copy submissions, but in the digital age an emailed photo seems a lot easier for everyone to deal with. Please include a contact number in case we need more information, as well as the names of the people pictured; the size of the animal; and the date and location of the hunt.

• If there are any interesting details about the hunt, let us know in your email. Maybe we’ll write a little longer story on it.

• When taking photos, check to make sure they are well lit and in focus before sending. Use a flash or light up the area with headlights if it’s dark. It makes a world of difference in the quality of the photo. We’ve had more than a few pictures over the years that could not be published because they looked like grainy, blurry photos of Bigfoot that were taken in a cave rather than a kid in the woods holding up deer antlers.

• Limit the gore. Hunting will, by its nature, produce bloody wounds. That doesn’t mean people want to see it. Again, take a quick look at your picture before you save it. If it looks more suitable for Fangoria Magazine than a family newspaper, try a different angle that crops out the worst of the gore or send us one that’s not as bad. We want to make people smile, not make them vomit.

Along the same lines, if it’s a picture of a first deer we prefer pictures of children before they have been blooded. It’s just a little more palatable for a wide audience.

• Be careful with your weapons. Last year, we noticed several photos where guns were propped up on deer with the barrels pointing toward the hunter. That’s an accident waiting to happen. Be aware of where your rifle is at all times and don’t let a photo op turn into a tragedy.

That’s about it. Head into the woods and have fun. Social distance. Shoot things. And send us your photos. We look forward to sharing them with the rest of the world.