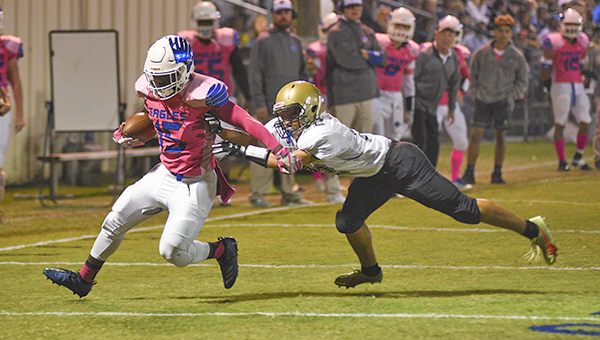 You’re in Four Down Territory. Each week during football season we’ll highlight four notes, nuggets, stats or trends from the weekend that was in Mississippi high school football, college football and the NFL.

The reason behind it, PCA head coach Blake Purvis said, was simple — a strong performance by his offensive line that allowed it to exploit its opponent’s risky defensive strategy.

New Orleans Home School blitzed often, Purvis said, and the line of Maureon Simms, Hayden Beard, Bridges Williams, Dwight Blue and Jacob Braxton picked it up most of the time. That opened the door for big plays and plenty of points.

Tyler Washington scored on runs of 90 and 47 yards, and also had a 75-yard kickoff return touchdown. Ricky Carraway scored on a 53-yard run. Braden Kapp caught a 43-yard touchdown pass.

Porter’s Chapel finished with 492 rushing yards on only 18 carries — an astonishing average of 27.3 yards per carry.

“You can’t downplay what (the line) did,” Purvis said. “We were seeing at least a six-man rush, if not seven or eight, every play, and they were picking it up and preventing the penetration. That allowed us to have some holes and some seams, and then once our running backs were able to break the line against the blitz, there’s nothing left between them and the end zone, which created the big plays.”

2
Southern Miss rushed for 202 yards as a team in its 41-31 victory over North Texas on Saturday. It was the first time this season, and only the third time in the last 21 games, that the Golden Eagles have reached the 200-yard mark.

Frank Gore Jr. ran for 130 yards and one touchdown on 23 carries. It was the Golden Eagles’ first 100-yard game since former St. Aloysius star DeMichael Harris finished with 121 against UTSA last November — a span of seven games.

“I give credit to (offensive line coach) Ryan Stanchek. He got that offensive line going tonight,” Southern Miss interim head coach Scotty Walden said. “All those guys did an amazing job up front for us and paved the way for those backs.”

3
Dallas Cowboys quarterback Dak Prescott set an NFL record Sunday by throwing for 502 yards and four touchdowns on a career-high 58 pass attempts in a 49-38 loss to the Cleveland Browns.

The former Mississippi State star is the first quarterback in NFL history to throw for more than 450 yards in three consecutive games. He has 1,690 passing yards in the first four games, which leads the league, and is on pace to throw for 6,760 yards — more than 1,300 more than the NFL single-season record.

Unfortunately for Prescott and the Cowboys (1-3), the huge numbers have not led to many wins. Prescott has thrown five interceptions in the last three games, and also lost a fumble against the Browns.

The defense, meanwhile, has been torched for 39, 38 and 49 points points in the last three games.

The Cowboys allowed 307 rushing yards to Cleveland, which was the most in franchise history. They are the first team since the 2012 Raiders to allow at least 38 points in three consecutive games in the same season. The only other time the Cowboys achieved that dubious feat was in their inaugural season in 1960, when they finished 0-11-1.

Dallas trailed the Browns 41-14 on Sunday before scoring 24 straight points in the fourth quarter. Cleveland sealed the game with a late touchdown run by wide receiver Odell Beckham Jr.

“We’re just making mistakes over and over again,” Prescott said after Sunday’s loss. “We keep hurting ourselves on offense and putting our defense in a bad spot and not starting fast enough. We put our defense in a compromising situation. That’s just unacceptable, and that’s not complementary football. It eventually hurts you and gets you down in the game, and then we’re forced to play outside of the way we want to play.”

4
Ole Miss and Kentucky combined for 84 points and 1,018 yards of offense Saturday in the Rebels’ 42-41 overtime victory. The Rebels’ most valuable player, however, turned out to be their punter and kicker.

On Monday, Mac Brown was named the Southeastern Conference special teams Player of the Week.

The senior punted five times for an average of 49.0 yards, with two kicks downed inside the 20-yard line. One of those was a 56-yard punt in the final minute of regulation that flipped field position and helped keep Kentucky from mounting a potential game-winning drive.
Brown ranks second in the country in punting average this season.

Kicker Luke Logan, meanwhile, went 6-for-6 on PATs, including the game-winner in overtime, and had touchbacks on five of his six kickoffs.

Slimmed-down Over the River Run set for Saturday

For the 32nd year in a row, Vicksburg’s residents will have a chance to test their mettle in a race... read more