Slimmed-down Over the River Run set for Saturday 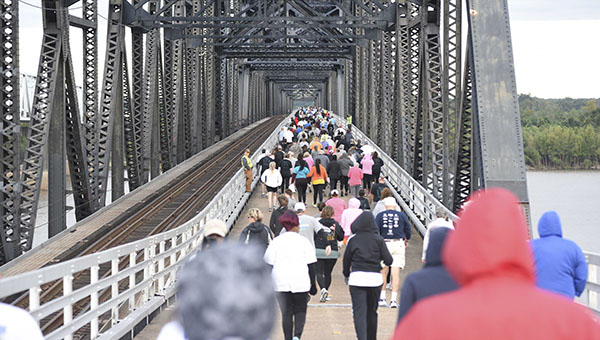 Runners and walkers head over the Old Highway 80 Bridge during the 2019 Over the River Run. (Courtland Wells/The Vicksburg Post)

For the 32nd year in a row, Vicksburg’s residents will have a chance to test their mettle in a race across the Mississippi River and back. This time, however, they’ll have to get in on the action early to do it.

The 32nd annual Over the River Run, a 5-mile run and race walk across the Old Highway 80 Bridge, is scheduled for Saturday, Oct. 10. It has become one of Vicksburg’s biggest road races, drawing as many as 800 runners and walkers, but because of COVID-19 restrictions the field is limited this year to 400.

About half of those slots have already been filled, race director Stacey Mahoney said, and there will not be any registration on race day because of COVID-19 concerns. For those reasons, she is encouraging anyone interested in participating to register as soon as possible — either in person at the Southern Cultural Heritage Center at 1302 Adams St., or online through southernculture.org — or risk missing out on a unique running experience.

The Over the River Run is a fundraiser for the Southern Cultural Heritage Foundation.

“The Track Club and the timing service want us to limit what goes on that day, and late registration is another activity they would have to worry about,” said Mahoney, who is also the director of the SCHF. “It just depends on our numbers at that point, if we would be allowed to have that or not. There are a lot of runners that want to wait to see what the weather is like that day. But we’re hoping that since they have the virtual as a choice, that they’ll do one or the other beforehand.”

The 400-person limit is for those actually running across the bridge. The SCHF will also have a “virtual” category that allows runners and walkers to do a 10K or 5K on their own and submit their times. The virtual entries will not count toward the 400 allowed on the course Saturday morning, but only the first 400 total entries will receive a race T-shirt with their $35 entry fee.

“We encourage people to register early, because we are limited this year,” Mahoney said. “There is a virtual category for those who are not ready to run in person yet. We know a lot of them are, because that’s mostly what’s coming in is in-person registrations. But we are offering two virtual categories — a 10K run or a 5K walk. They get a T-shirt as well.”

The addition of the virtual category and the slimmed-down field are just two of the ways this Over the River Run will look different from many of its predecessors.

The postrace awards ceremony will take place at the Delta Point parking lot on Washington Street, as usual, but will not be accompanied by the party that traditionally goes along with it. The 1-mile children’s fun run that follows the 5-mile run and walk races has also been canceled.

Runners and walkers will leave the starting line in waves of 10 to 20 to aid with social distancing. Electronic chip timing by MS Race Timing & Management, assisted by the Mississippi Track Club, will ensure that all competitors are on a fair footing.

Participants will also be asked to wear masks before and after the race, and maintain social distancing as much as possible on the course.

Many of the new rules, Mahoney said, had a trial run during the SCHF’s Star Spangled Night Run 5K in June. That was the first Mississippi Track Club event since the start of the pandemic in March, and the organization has refined some of its procedures since then.

Mahoney said the Night Run served as a good test for the much larger Over the River Run. A total of 124 people participated in June’s race, and three times that number are expected for this one.

“It’s been a little bit of a challenge, but not as much as you would think. We had our Night Run at the end of June. That’s a smaller run for us, so we got to practice these precautions because we were right in the middle of COVID during that time. That practice run went really smooth,” Mahoney said. “This is a bigger run, so we weren’t sure if we were going to be able to pull it off, but we did get our permission from the bridge to move forward. Then we’ve been working with the Mississippi Track Club and the Mississippi Timing Service to get those precautions, which they came up with and added to since our Night Run.”

In addition to the runners and walkers that have or still plan to sign up, Mahoney offered an extra dose of appreciation to the other entities that have allowed the Over the River Run to see its 32nd birthday — the race’s dozen or so sponsors who help pay the bills and the half-dozen organizations beyond the SCHF whose assistance is required to stage the race.

Given the financial difficulties brought on by the pandemic for sponsors like Ameristar and WaterView Casino, and the cooperation needed from governmental agencies like the Vicksburg Police Department, Warren County Sheriff’s Office and Warren County Bridge Commission, Mahoney said getting to this point since March has not been a sure thing.

“We are very, very, very excited. We are grateful that we have been given the permissions we needed to have the race, because it’s not on our property. It requires the city of Vicksburg, the police department, the sheriff’s department, the medics, the Bridge Commission … it requires all of those people saying, ‘We’ll show up that day and be there for you,’” Mahoney said. “We could not do it without all of those entities. We are so thankful they gave us their support. And then our sponsors, at a time like this, to have some great sponsors on board, it’s making it possible for us to go through with this.”

The Over the River Run, Mahoney added, is a crucial event for the SCHF. The run is its biggest annual fundraiser and helps the organization not only preserve its five buildings at the corner of Adams and Clay Streets, but pay staff and offer programs throughout the year.

“This is, by far, our biggest fundraiser that we have. So it is very, very important. We have become reliant on the funds we bring in from the Over the River Run to pump into these five historic buildings, which cost a lot of money to keep up and preserve,” Mahoney said. “And then, of course, offering the programs that we do. So many of them are free, and the ones that aren’t free are low-cost to the community. That is vital for us to continue our mission — especially after a rough year.”