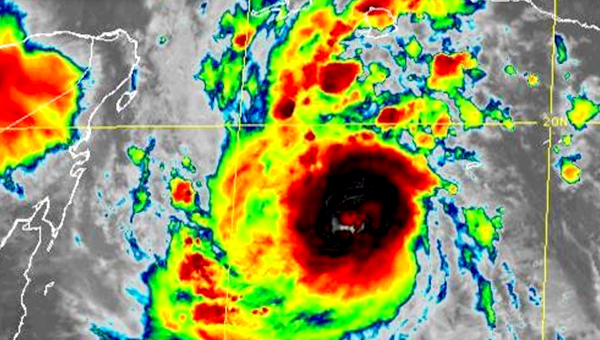 Residents urged to get ready for effects of Hurricane Delta

If Hurricane Delta continues on its present course, Warren County residents can expect heavy rain and high winds through the weekend as the storm makes its way across Mississippi and into Tennessee.

According to information from the National Hurricane Center Delta, the 25th named storm of the season and the 10th storm to hit the U.S., is forecast to hit the Louisiana coast between Baton Rouge and Lafayette between late Friday and early Saturday before moving east through Mississippi. The current forecast track puts Delta as a tropical storm near Vicksburg Saturday afternoon.

As of 2 p.m., Tuesday Delta was a Category 4 storm with 145 mph winds and is expected to strengthen before making landfall.

“Right now, the forecast is suggesting that the southwest corner of Mississippi could see rainfall amounts in the 5-to-7-inch range with some areas of isolated higher amounts and then the rest of the area probably in the 3- to 5-inch range,” said Latrice Maxie, a meteorologist with the National Weather Service office in Jackson. “Of course, there could be some higher amounts depending on how strong the storm is when it makes landfall and how far inland the winds may spread. Gusty winds are possible with this storm as well.”

According to a graphic from the National Hurricane Center, Vicksburg has about a 50-60 percent chance of getting tropical-storm-force winds of 39-73 mph.

Elfer believes the storm may shift some before it makes landfall, adding, “I think it may shift a little east and that would be in our favor. But I’m sure Friday and Saturday we’ll see some rain, at least.

“The takeaway is this; we could see heavy rain, we could see some gusty winds which is going to result in some trees down and we’ve already got some damaged roads,” Elfer said.

He said residents need to have a good weather warning system, pay attention to the weather changes and have their shelter plans in place.

“Don’t wait until the end of the week,” he said. “It wouldn’t be a bad idea to make sure their disaster kits are fully stocked — that means medicine, cash, a way to charge your cellphone if the lights go out, a way to cook; have canned foods and non-perishables and make sure the alert systems are working.”

If someone needs to know what’s needed in a disaster kit, Elfer said they can go to the Mississippi Emergency Management Agency website at www.msema.org

For those living, working or visiting Vicksburg and Warren County for at least the next month, keep those facemasks and... read more