St. Al suddenly in the thick of a playoff chase 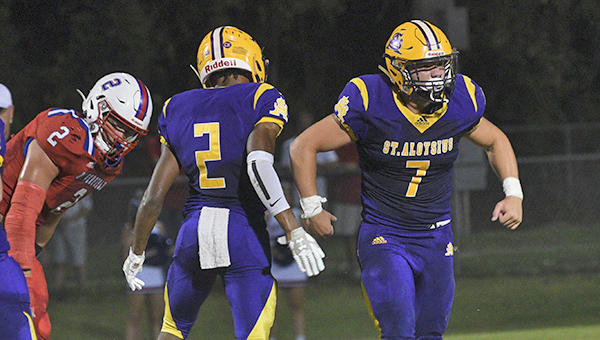 A week or two ago, the St. Aloysius Flashes were talking about finding moral victories and thinking about playing out the string on a dismal season.

Last Friday, all of that doom and gloom went out the window.

After beating Silliman Institute 38-0, the Flashes are suddenly very much alive for a berth in the MAIS Class 5A playoffs and even the District 3-5A championship. It won’t be easy — the road starts with this Thursday’s homecoming game vs. perennial power Adams County Christian — but it has given them a renewed focus and new goals to strive for as the season winds down.

“It’s kind of crazy,” St. Al head coach Stacy Sizemore said with a laugh. “A couple of weeks ago we were fighting to get a win or small goals. Winning was a huge lift for us. I was happy to see our kids and our coaches get excited when we accomplished that. It helps them refocus and gives them a sense of purpose besides just playing.”

The game against ACCS was moved up one day to Thursday because of the approach of Hurricane Delta. The storm is forecast to make landfall along the Louisiana coast Friday and then affect Mississippi Friday night and Saturday.

St. Al (3-4, 2-1 District 3-5A) is currently tied for 10th in the MAIS Class 5A power points rankings that determine playoff berths and seeding in the 12-team bracket. It probably still needs to win one of its last three games against either ACCS (5-2, 2-0), Washington School or Cathedral to shore up a wild-card spot.

St. Al could also pull into a three-way tie for first place in the district with ACCS and Copiah Academy if it wins Thursday. Copiah beat St. Al 31-0 two weeks ago.

The lopsided loss to Copiah means St. Al would probably need to win by at least 18 points against ACCS to even out the point differential tiebreaker in a three-way tie for the district title.

“I haven’t paid that much attention to it,” Sizemore said of the various playoff scenarios. “People have been telling me, but we just have to control the things we can control.”

Focusing on the immediate task at hand is probably wise. Adams County Christian won the MAIS Class AAA championship in 2018, and reached the Class 5A semifinals — after the association revamped its classification system — in 2019. It has a 75-24 record since 2013.

Its only two losses this season have been to three-time defending Class 3A champion Greenville-St. Joe and perennial Class 6A power Jackson Prep.

“They seem to be even better this year than they were last year,” Sizemore said. “They have a great team, but they do have a couple of losses so they’re not invincible. We have to play our best game.”

The Flashes played their best game of the season, so far at least, last week against Silliman. They rushed for more than 200 yards, led by 138 yards and three touchdowns from Brennan Williams, and added an additional 100 yards through the air. That came after they had scored a total of 12 points in their first five games.

Now they need a repeat effort to take advantage of a second chance at turning this into a successful season.

“We always talk about being prepared when an opportunity arises,” Sizemore said. “Now we have an opportunity, and we need to take advantage of it.”