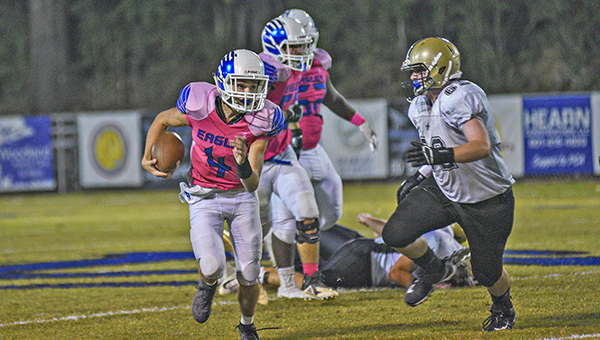 The past couple of years, Porter’s Chapel Academy has entered the month of October with a mathematical chance at the postseason, but not a realistic one.

Undermanned and overmatched, the Eagles were easy cannon fodder for the powerful brutes at the top of their district. They were outscored 262-20 in the last three games of the 2018 and 2019 seasons, on their way to combined season records of 3-17.

That is changed this year.

PCA heads into its MAIS District 4-3A opener Friday against Greenville Christian with a winning record and a clear path to its first playoff berth since 2014. Head coach Blake Purvis said it’s a refreshing change that has given his team a little extra pep in its step this week.

“When you’ve got all of your district games at the end of the schedule, you can be 0-7 and still be mathematically alive or in the hunt for a district championship,” Purvis said. “But going into this with a winning record and having some success and being an improved football team, gives a little more confidence to what you do have ahead of you. We face a tough, tough road the next three weeks. It’s not an impossible task, by any stretch, but we’re going to have to play solid football to be a factor.”

The Eagles (4-3, 0-0 District 4-3A) can win the district title by winning their last three games, but it might be the most difficult three-game stretch any MAIS team could face.

Greenville Christian (5-1, 1-0) has rocketed to No. 5 in the Mississippi Associated Press MAIS poll and won five consecutive games since getting nearly two dozen transfers from various Delta public schools that opted not to play football this season.

The list of transfers includes quarterback Deandrea Smith, who threw for more than 2,500 yards and 27 touchdowns while leading Greenwood to the MHSAA Class 4A semifinals in 2019. Their arrival transformed overnight a program that has only won more than six games in a season four times since it was started in 1971.

Greenville Christian lost its season opener to Tri-County, then nudged past St. Aloysius 18-3 on Aug. 28 in its first game with the new players. In three games since then, it has scored an average of 46.3 points per game. It announced its arrival as a championship contender in Class 3A by crushing three-time defending champion Greenville-St. Joseph 50-7 on Sept. 11.

“They are extremely talented, and extremely deep. They’ve got multiple guys at every position that can make plays and are difference-makers,” Purvis said. “Obviously, with COVID and the transfers they’ve been able to get in — somewhere in the neighborhood of as many transfers as guys I have on my roster — it’s definitely a different team than they were last year or even early on this year.”

Purvis said he’s hoping for a little help from Mother Nature — the game was still scheduled for Friday, when wind and rain from Hurricane Delta are forecast to roll through Central Mississippi, although the kickoff was moved up 90 minutes to 5:30 p.m. — and some positive momentum to give the Eagles a better chance at success.

The weather, he hopes, will slow down Greenville Christian’s potent offense. A couple of recent games, he hopes, will give the Eagles the confidence they need to spring an upset.

PCA is coming off a 65-34 victory over New Orleans Home School in which five different players scored touchdowns and the Eagles came within one of tying the school’s record for most points in a game.

“I think there’s things we can do to have success, but we’ve got to build on our strength and that’s our offensive line. That’s who we’ve got to lean on,” Purvis said. “We just have to be good at what we do. Shorten the game and try to take their athletes out of the equation as much as possible.”

Once they get past Greenville Christian, the Eagles’ schedule does not get easier. They have a home game against Glenbrook (3-3, 0-1) next week that they’ll need to win to either keep their district title hopes alive or shore up a wild-card berth. Then a road trip to Greenville-St. Joe (5-1, 1-1) awaits in the regular-season finale on Oct. 23.

They have a chance, though — and a real one, not just a theoretical one — to be a factor in the race. After years of October misery, the thought of playing important games down the stretch brought a smile to Purvis’ face.

“You have three games to go and three district games. Everything is still a possibility at this point. Playoffs are still alive, district championships are still alive,” Purvis said. “It’s a tough road, no doubt. We’ve got the defending state champion, we’ve got three straight playoff teams from last year — high-seeded playoff teams — and a team that knocked off the defending state champion and ended a 27-game win streak. That’s what we’re looking at. It’s going to be a tough row to hoe, but everything is still in play at this point.”

BIRMINGHAM, Ala. (AP) — No. 17 LSU will travel to Missouri’s home stadium for a late-morning kickoff on Saturday instead... read more