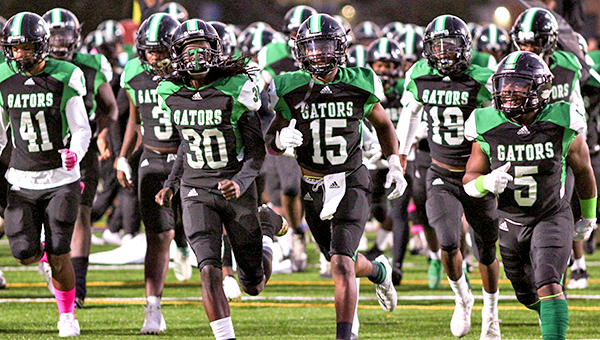 Vicksburg High's football team runs onto the field before last week's game against Neshoba Central. The Gators will go on the road Thursday night to play Cleveland Central. (Walter Frazier/For The Vicksburg Post)

Early this week, as teams scrambled to adjust their schedules and move games to Thursday to avoid the wrath of the approaching Hurricane Delta, Vicksburg High remained calm.

The Gators are used to this Thursday thing.

For the second time in three weeks — and fifth time in the past nine games dating to last season — the Gators will play on a Thursday night when they head north to face Cleveland Central. The adjustments have come for a variety of reasons, from avoiding bad weather to field availability, but it’s now part of the routine.

“One good thing is, I schedule practice and they show up. We did this a couple of weeks ago so we’re used to the different schedule,” Vicksburg head coach Todd McDaniel said.

Vicksburg (1-3, 1-1 Region 2-5A) has won its last two Thursday nighters, beating Callaway last season and South Pike two weeks ago. This time out, it will play Cleveland Central (1-3, 1-1) in a game that could be an eliminator in the Region 2-5A playoff race.

With the way the standings have shaped up, with Neshoba Central and Ridgeland separating from the pack early and Provine and Callaway not playing because of COVID-19 concerns, there are four teams fighting for the last two playoff berths from the league. Vicksburg and Cleveland Central are among them, and the winner of Thursday’s game will pick up an important head-to-head tiebreaker along with a victory.

“It’s huge. We really need this win,” McDaniel said. “They’re a good football team and extremely big. Hopefully we can get in there and wear them down with our speed and come out with a win.”

After two promising games, including a come-from-behind 23-22 win over South Pike, the Gators took a step backward last week in a 34-6 loss to Neshoba Central.

Vicksburg had 146 rushing yards, but 130 of that came on two plays — a 73-yard touchdown by Laurence Sullivan and a 57-yard burst by Sha’Kori Regan. On their other 37 carries, the Gators averaged less than a half-yard per attempt. Eighteen of their 39 running plays either lost yardage or resulted in no gain.

McDaniel said the lack of a full offseason program because of the COVID-19 shutdown in the spring and summer is starting to show up during the fall.

“Our kids are working extremely hard. But there’s no substitute for the weight room,” McDaniel said. “When you’re physically strong, that gives you confidence to make plays on the football field.”

Equally concerning for the Gators was a lack of discipline against Neshoba Central. They were penalized 12 times for 112 yards. Six of the penalties were personal fouls, although they offset when Neshoba was also called for a personal foul.

On one possession spanning the third and fourth quarters, with the score still a manageable 14-0, Regan’s 57-yard run moved the ball from Vicksburg’s 6-yard line across midfield. Then the Gators were called for two false start penalties and one holding. A fumbled handoff resulted in a turnover and a personal foul at the end of the return gave Neshoba the ball at the VHS 8-yard line.

The Rockets scored two plays later — after two more penalties on the Gators — to go up 21-0 and effectively seal the win.

“A lot of the penalties weren’t warranted, some were,” McDaniel said. “When you’re trying to build a program from scratch and you only have three offensive starters back from last year and no weight room, it’s a learning curve for everybody. We’re grasping it and getting there.”