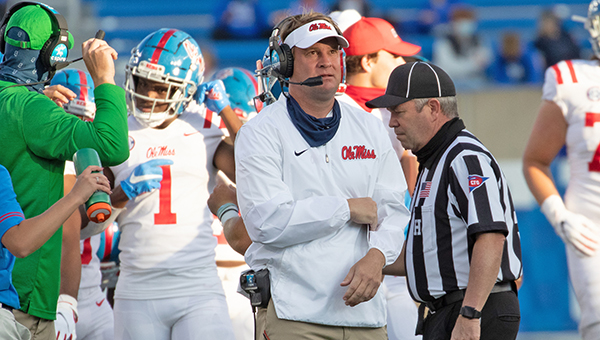 OXFORD — Hurricane Delta has altered the plans for another Southeastern Conference football game.

On Thursday, the league office announced that kickoff of the Alabama at Ole Miss game on Saturday will be pushed back 90 minutes, to 6:30 p.m. at Vaught-Hemingway Stadium in Oxford.

The game was originally scheduled to start at 5 p.m.. The change in kickoff was made because of a forecast of better conditions as the storm moves through North Mississippi during the afternoon hours.

The game will be televised by ESPN as originally planned. Parking lots will open at 3:30 p.m., and gates to the stadium open at 4:30.

“This decision was made with the safety and wellbeing of our student-athletes, staff and fans as the priority,” Keith Carter, Ole Miss Vice Chancellor for Intercollegiate Athletics, said in a statement. “I appreciate the cooperation of the SEC, Alabama and ESPN in changing the start time, and we will be prepared to make any other necessary operational adjustments to ensure a safe gameday environment. Our thoughts and prayers go out to all those that could be impacted by this storm.”

Alabama-Ole Miss was the second SEC game affected by the arrival of Hurricane Delta along the Louisiana coast. On Wednesday, LSU and Missouri moved their game from Baton Rouge to Columbia, Missouri, to stay out of the storm’s path.

The LSU-Missouri kickoff time was also moved, from 8 p.m. to 11 a.m. It will be televised by ESPN, although which of the cable network’s channels will carry the game has not been announced.