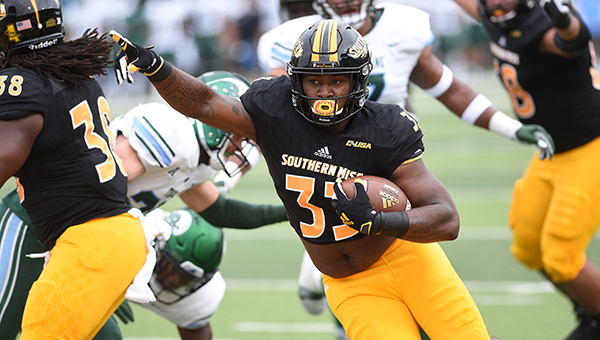 HATTIESBURG — Florida Atlantic’s football game at Southern Mississippi on Saturday has been postponed because of COVID-19 issues.

The schools said they will work with Conference USA to reschedule. Florida Atlantic has already had two non-conference games called off this season.

The Owls were unable to play Georgia Southern last month because of their COVID-19 problems. They were also scheduled to host South Florida, but the Bulls had to pull out because of contract tracing related to their game against Notre Dame.

This is the 26th game involving FBS teams to be postponed or canceled since Aug. 26.
Before Thursday’s announcement, there had been concern that the game could be affected by the arrival of Hurricane Delta in Mississippi.

“We understand this COVID-related decision made by Florida Atlantic to not play our game this weekend and appreciate the consistent communication with our athletic department during the week,” Southern Miss Director of Athletics Jeremy McClain said in a statement. “We are disappointed for our student-athletes who will not get a chance to participate, however we will work with Florida Atlantic and Conference USA to reschedule this game for later in the season.”

Southern Miss will return to action when its travel to El Paso to face UTEP on Saturday, Oct. 17. Kickoff is set for 6:30 p.m., and the game will be televised on ESPN2.