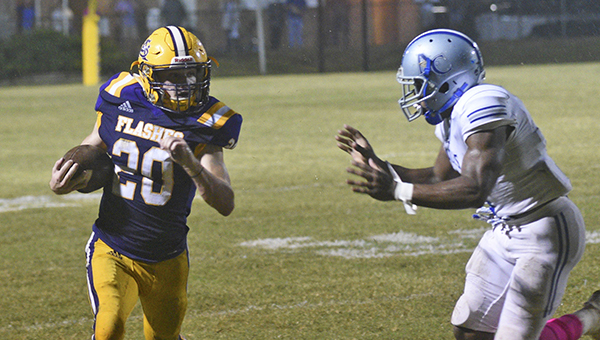 St. Aloysius came into Friday’s game against Adams County Christian School with a chance to shore up an improbable playoff berth and possibly even claim a piece of the MAIS District 3-5A championship.

It wasn’t meant to be.

“They’re big up front and we’re undersized, and they would ride us out of there and get in the open field,” Sizemore said. “We had some key players that were not playing. But I’m happy with the way they played. I firmly believe every one of our kids is playing up to their best athletic ability.”

ACCS (5-2, 2-0) got out to a 24-3 lead at halftime, and then kept St. Al at arm’s length in the second half while giving its reserves some extended playing time.

For St. Al, Brennan Williams rushed for 89 yards and a touchdown on 18 carries, and Padre Gray had 73 yards and a TD on only eight carries. Quarterback Tristan Wilbanks also scored a rushing touchdown. Reed Bourne kicked a 35-yard field goal in the second quarter.

Defensively, Chase Tucker had nine tackles, one forced fumble and a fumble recovery. Wes Warnock had eight tackles and an interception, and Josh Larson had six tackles.
Tucker and Warnock, who both play wide receiver on offense as well as on defense, also combined for seven receptions for 61 yards.

St. Al’s 38-0 win over Silliman the previous week — as well as two forfeit wins earlier in the season — put it in the odd position of playing for a share of first place in District 3-5A on Friday night despite having score a total of 12 points in its first five games.

The Flashes still have a chance to reach the MAIS Class 5A playoffs if they can win one of their last two.

St. Al goes on the road to Washington School next week, and then finishes the regular season at Catholic School rival Cathedral on Oct. 23.

Riverdale 26, Tallulah Academy 22
Riverdale Academy took advantage of a crucial pass interference call to extend a drive in the fourth quarter, and went on to score the go-ahead touchdown late as it beat Tallulah Academy on Thursday night.

“We had some crucial penalties called against us. Most of them were legit, but I didn’t agree with some of them,” Tallulah coach Bart Wood said.

Wood added that a number of distractions, ranging from homecoming to moving the game up a day in advance of Hurricane Delta’s approach hurt its focus.

“This was a crazy week. It was homecoming week, the game went from Friday to Thursday, and our girls were in the softball state tournament on Monday so a lot of our players went to that. I didn’t have a practice on Monday,” Wood said. “I’m not upset at the kids, it’s just been a lot going on.”