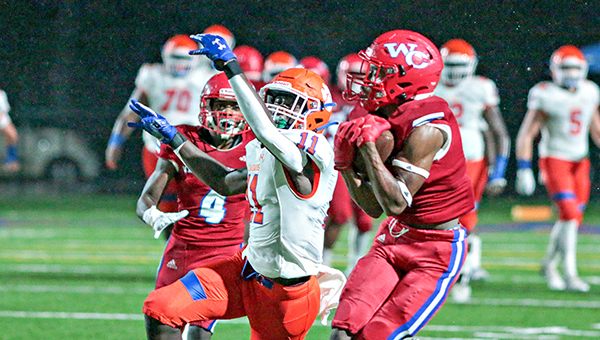 There will be, Warren Central hopes, bigger games and higher highs than what they experienced Thursday night. No matter what happens in the next two months, however, it might be difficult to come up with a game and an effort that better defines this particular group of Vikings.

No. 4 Warren Central held the Jaguars to 160 yards of total offense and earned its first shutout in the series since winning 28-0 in the 1992 Red Carpet Bowl.

“We have been on the wrong end of our fair share of heartbreakers (against Madison Central). Give them credit where it’s due,” Warren Central head coach Josh Morgan said. “But tonight, we talked about winning all week. Whatever it takes to win and being ready for that moment, and being poised and being confident. They didn’t dwell on anything that happened in years past. We had it in our mind that we wanted to win and we were going to do whatever it took.”

The Vikings (6-0, 3-0 Region 2-6A) also snapped a six-game losing streak against Madison Central (4-2, 2-1) with its first win in the series since 2015. This win vaulted Warren Central into a prime playoff position — it was one of only six undefeated teams left in Class 6A entering this week’s action — and served notice that it will be a team to reckon with down the stretch.

Warren Central has an open date next week, when it was supposed to play Murrah, and will return to action Oct. 23 at home against Clinton. Murrah opted not to play this season because of concerns about COVID-19, and WC will pick up a forfeit victory during its bye week.

“A lot of work went into it,” Morgan said of beating Madison Central. “I’m just so proud for our guys, our school and our community. It’s just a big win, and it makes the next one bigger. It sets us up in a good situation to continue to play meaningful football.”

Eight of the last 10 games in the Warren Central vs. Madison Central series have been decided by eight points or less, and Thursday’s defensive slobberknocker added another layer to their rivalry.

Griffin capped a 16-play drive on the game’s opening possession with a 35-yard field goal, and then neither team scored again until Gilliam booted a 21-yard field goal with 44 seconds left in the third quarter.

The only other points came on a safety with 36 seconds left in the game, when WC’s Laurence Madison sacked Madison Central quarterback Vic Sutton in the end zone.

Madison Central tried an onside kick on the ensuing free kick, and the wet football squirted through two different piles before Warren Central finally recovered it near its 40-yard line.

“With us? With these two teams? Nothing surprises you. It’s two teams going at it,” Morgan said. “Yards were at a premium. It was really tough to move the ball. We had a formula and a plan, and I don’t think we had one turnover. We were not going to beat ourselves. We were not going to help them out in any kind of way. We were going to go toe-to-toe and be good with that, and be really good at special teams. I was just super proud of the guys’ mentality. It paid dividends for us tonight.”

With no offense on either side — Warren Central only had 180 total yards — it was the Vikings’ defense and special teams that made the difference.

A strip sack by Taylen Smith in the first half ended one Jaguar drive in Warren Central territory. Bell’s second interception of the game was returned to the 7-yard line and set up Gilliam’s field goal that made it 6-0.

Warren Central’s punters also played a key role. Bell’s interception was set up by a pooch punt from Riley Lampkin that was downed at the 2-yard line. Then, in the last two minutes, Griffin came up big.

The senior shanked a punt under heavy pressure, but a running into the kicker penalty gave him another chance. His second punt — also under a rush from the Jaguars — hit the turf at the Madison Central 20, rolled to the 7, and was downed there for a 45-yard kick. After three incomplete passes, Laurence Madison’s sack made it 8-0 and finally allowed the Vikings to breathe a little easier.

“I was just trying to keep my hands dry and all that,” Griffin said. “I knew from the start they would be coming, from the film we had watched. It was just a matter of being straight, focusing on my snapper, giving faith in him, and I knew my blocking was going to be good so I didn’t have to worry about that. Good snap, good hold, and get it off.”

After Warren Central finally recovered the onside kick, quarterback Kentrick Thompson was able to take a knee and the Vikings celebrated. They are 5-0 for the first time since 2016, and after their second shutout of the season they’re starting to feel like this just might be a special kind of year.

“We have a heck of a team,” Bell said. “We’ve got so much chemistry, so much love for one another, and going against them it was just a mindset that we had to play hard. It was a great fight. They are a good team, but we just did our thing — we played as a team and played as one team.”