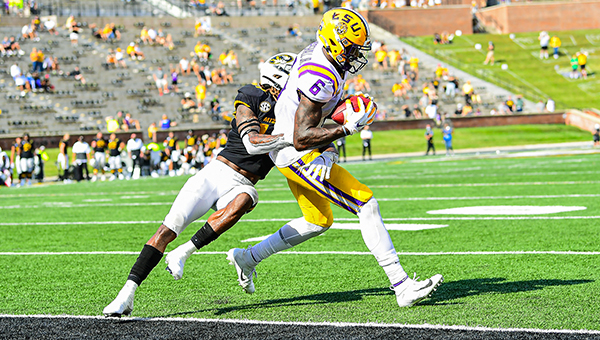 COLUMBIA, Mo. (AP) — In a game that was dominated by a pair of offenses that seemingly couldn’t be stopped, it was the much-maligned Missouri defense that managed to stand tall against No. 17 LSU when it came time to decide the game.

Connor Bazelak threw for 406 yards and four touchdowns despite missing three of his top receiving targets due to COVID-19 protocols and coach Eli Drinkwitz’s bunch held four times at the 1-yard line in the final minute to escape with a 45-41 victory in a game moved from Baton Rouge because of Hurricane Delta.

LSU had taken a 41-38 lead when Cade York hit a 51-yard field goal on the final play of the third quarter. But when York tried to extend the lead midway through the fourth, his 45-yarder was blocked, and Missouri needed just four plays — the big one a 69-yard pass to Chance Luper — before Bazelak hit Nico Hea with the go-ahead touchdown with 5:18 to go.

Myles Brennan, who threw for 430 yards and four TDs, quickly moved LSU the other direction. Terrace Marshall Jr. had four catches on the drive, the last a completion to the 1-yard line with 44 seconds left. But after Tyrion Davis-Price was stuffed twice up the middle, Missouri batted down two straight passes to preserve the upset.

“The defense did a great job at the end,” Bazelak said. “Just unbelievable.”

Tyler Badie took part in an early flea-flicker for a touchdown, then had TDs on the ground and through the air, as Mizzou (1-2) piled up 586 yards of total offense behind a freshman quarterback and his talented running backs.

“We couldn’t stop anybody. Really poor showing on defense,” LSU coach Ed Orgeron said. “I thought our offense played an outstanding game except for down there, we’re inside the 1, and we have to score. We have to score to win the game.”

The game was tied 24-all at halftime thanks to some trickery by Missouri’s offense — and no thanks to the Tigers’ miscues, including a pair of muffed punt returns and Bazelak’s fumble that turned into an LSU score.

Missouri struck first when Bazelak took a pitch from Badie on a flea-flicker and threw downfield to Tauskie Dove for a 58-yard TD reception. But the Bayou Bengals answered with back-to-back touchdown passes from Brennan to Marshall, part of an opening salvo in which the LSU quarterback was 7-of-7 for 114 yards passing.

Brennan cooled off, though. He was 6-of-15 for the rest of the half while LSU managed a single yard on the ground.

That gave Mizzou a chance to turn a 24-14 deficit into a tie game. Jalen Knox took an end-around 16 yards for a score, then Rountree ran right out of his shoe to help set up Harrison Mevis’s 52-yard field goal before halftime.

The storylines of the first half continued in the second: Missouri made mistakes — Rountree fumbled at his own goal line and Tyrion Davis-Price promptly ran in for an LSU touchdown — and LSU kept blowing defensive assignments, which led to Bazelak answering with a 41-yard touchdown toss to wide open Micah Wilson.

The back-and-forth continued with Brennan hitting Marshall on the next play for a 75-yard go-ahead score, and Missouri answering a couple series later when Badie caught a slant pass and took it 21 yards to make it 38-all.

Mizzou kept answering until it finally took a 45-41 lead, its first since leading 7-0 in the first quarter.

“Unless they cancel the season, no, it’s not a signature win. We have a lot more games to win,” Drinkwitz said. “I didn’t see a trophy out there. Let’s just keep moving forward.”