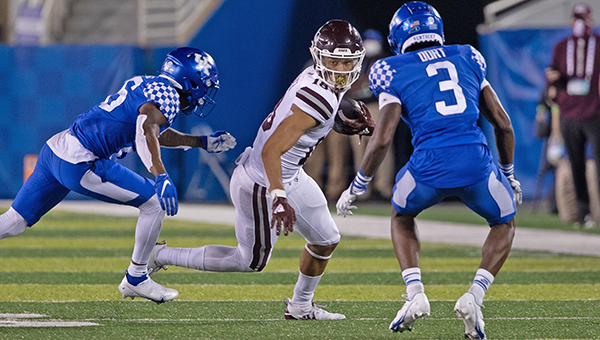 LEXINGTON, Ky. (AP) — Terry Wilson threw a second-quarter touchdown, and Chris Rodriguez rushed for another after the first of six interceptions that helped Kentucky beat Mississippi State 24-2 on Saturday night.

Jordan Wright sealed the hard-earned victory by scoring on an 8-yard interception return with 6:25 remaining for the Wildcats (1-2, 1-2 Southeastern Conference). Kentucky gained just 157 yards but that was enough thanks to an aggressive defense that shut out the Bulldogs’ Air Raid offense. Kentucky picked off K.J. Costello four times, the first of which linebacker Josh Paschal jumped perfectly to return 76 yards and set up Rodriguez’s 2-yard TD run that made it 14-0.

Jamin Davis and Jamar “Boogie” Watson picked off Costello in the end zone and Will Rogers at the goal line respectively, and Kelvin Joseph also intercepted Costello. D’Eryk Jackson’s pick of Rogers in the final seconds closed the Wildcats’ win.

“We didn’t expect that many turnovers, but that’s what happens when everybody strayed to the ball and just makes plays,” said Davis, who had 11 tackles. “We were just trying to earn a little bit of respect tonight.”

The interceptions tied for second most in program history, the last coming against Xavier on Sept. 25, 1948. It was the Wildcats’ most in a game since posting seven against Florida on Sept. 11, 1993.

After two games without a takeaway, they certainly were long overdue for a Kentucky squad needing a victory.

“We were obviously in good position and had the opportunity today to make plays, and we did,” Kentucky coach Mark Stoops said. “We had good technique, coaches had them in good position. When they had the right opportunity, they made plays.”

Wilson’s 12-yard TD pass to Keaton Upshaw followed a 51-yard run down the left sideline, the most explosive play in a defensive battle that made yards hard to come by. The senior quarterback netted 50 rushing yards on 13 carries and completed 8 of 20 passes for 73 yards, totals that stood up because of Kentucky’s defense.

Meanwhile, Mississippi State (1-2, 1-2) struggled with scoring and turnovers for the second consecutive game.

The Bulldogs gained 295 yards, their second consecutive dropoff after putting up 632 in a 44-34 upset of defending national champion LSU in the opener. Their lone points came on a third-quarter safety after a bad snap past Kentucky punter Max Duffy at midfield that he kicked back through the end zone.

Costello was 36 of 55 for 232 yards passing, but has now thrown nine interceptions in three games. The Bulldogs have scored 16 points in losses to Arkansas and Kentucky. Mississippi State hosts No. 21 Texas A&M — fresh off its 41-38 upset of No. 4 Florida — next weekend.

“Nearly every problem we had was self inflicted,” Mississippi State head coach Mike Leach said. “With a lot of respect to University of Kentucky, it was one self-inflicted wound after the next. I’ve been in plenty of games where we didn’t put the ball on the ground. I don’t know how many balls we put on the ground, but I lost count.

COLUMBIA, Mo. (AP) — In a game that was dominated by a pair of offenses that seemingly couldn’t be stopped,... read more