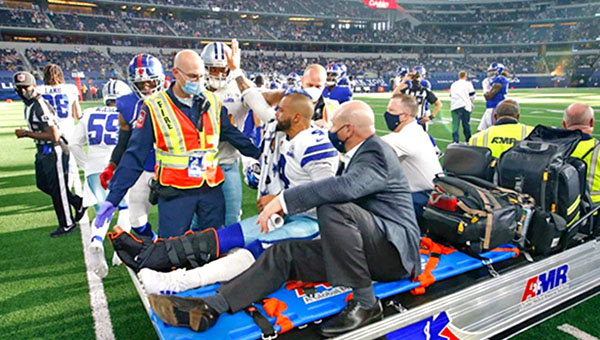 Dallas Cowboys quarterback Dak Prescott (4) waves to the crowd as he’s carted off the field in the second half of Sunday’s game against the New York Giants. The former Mississippi State star suffered a serious injury to his right ankle and was scheduled to have surgery Sunday night. (Sam Hodde/The Dallas Cowboys)

ARLINGTON, Texas (AP) — After Dak Prescott’s season ended on a gruesome ankle injury, his running mate for all five of their seasons with the Dallas Cowboys had a hard time getting through the post-game interview.

Ezekiel Elliott sounded crushed, even after backup Andy Dalton led a drive to Greg Zuerlein’s second game-ending field goal of the season as the Cowboys rallied twice in a 37-34 victory over the winless New York Giants on Sunday.

“I can’t even think right right now,” Elliott, the two-time rushing champion, said to no question in particular as he continued trying to absorb the third-quarter injury to Prescott, a two-time Pro Bowl quarterback who was the unheralded fourth-round pick the same year Elliott went fourth overall.

“It’s hard to kind of put in words,” Elliott, who rushed for 91 yards and two touchdowns, said in the middle of an answer about Dalton’s role in the rally. “I’m sorry. I’m just struggling a little bit right now.”

Prescott was going down in the arms of defensive back Logan Ryan at the end of a 9-yard run in the third quarter when the Dallas quarterback’s lower right leg got caught under Ryan and appeared to snap.

Prescott reached for the leg as he writhed in pain, and TV images showed his right foot bent at an awkward angle away from his leg. He was fighting back tears as he was carted off with a cast on the leg. Most of Prescott’s teammates rushed to greet him, as did several New York players, including Ryan.

The team said Prescott had a fracture dislocation of the right ankle and was taken to a hospital, where surgery was planned for Sunday night. Prescott started the first 69 games of his career, from the beginning of his rookie season.

The former Mississippi State star, was having perhaps the best season of his career. He entered the game leading the NFL with 1,690 passing yards, and had thrown for nine touchdowns in four games. He threw for 4,902 yards and 30 touchdowns last season, and is also the Cowboys’ career leader for rushing touchdowns by a quarterback with 24.

Prescott was 14-of-21 passing for 166 yards, with no touchdowns and one interception before his injury Sunday. He also caught a touchdown pass.

“I feel terrible for him,” first-year Cowboys coach Mike McCarthy said. “He was having a tremendous year in the short time working with him. He’s made such an impression on me and he’s clearly the leader of this football team. I have no doubt that he’ll bounce back from this and this will be all part of his great story.”

Michael Gallup made two spectacular sideline catches on the final drive. The first was a toe-dragging 19-yarder and the second an over-the-shoulder catch to the New York 16 with Dion Lewis running stride for stride and one foot barely staying inbounds.

Both catches held up on review, the latter after the Cowboys had run the clock down to 3 seconds before a timeout to set up Zuerlein’s 34-yarder to drop the Giants to 0-5. Both wins for the NFC East-leading Cowboys (2-3) have come on game-ending kicks by Zuerlein, and after rallies from deficits of at least two touchdowns.

It was the first game at the home of the Cowboys for former coach Jason Garrett, the Giants’ offensive coordinator who was replaced by McCarthy in Dallas after the Cowboys missed the playoffs amid high expectations last season.

Four years ago, Garrett chose to keep Prescott, then a rookie leading a franchise-best 11-game winning streak, as the starter over Tony Romo when Romo was healthy again. Prescott, who replaced an injured Romo in the preseason, has started every game of his career.

Garrett’s offense stopped a two-game streak without a touchdown by getting in the end zone on New York’s first possession on a 3-yard reverse to receiver Evan Engram.

The Giants led 17-3 in the second quarter — the fourth straight game with a double-digit deficit for the Cowboys — before the Cowboys went in front 24-20 with 16 seconds left in the first half on Prescott’s first career touchdown catch. The 11-yarder was from receiver Cedrick Wilson, who took a reverse pitch from Elliott.

Prescott had a huge smile when greeted by right guard Zack Martin after becoming the first Dallas QB with a touchdown catch since Danny White had his second in 1985. A mere 30 minutes later, Prescott’s season was over.

“I’ve got a sick taste in my stomach for it, because he was playing a hell of a game, it was a hell of a battle between us,” Ryan said. “Nothing ill will on my part. I know he’s going to come back stronger.”

Dalton was Cincinnati’s starter for nine seasons before the Bengals drafted Joe Burrow No. 1 overall last spring and Dalton signed a one-year deal to be Prescott’s backup. He threw for 31,594 yards and 204 touchdowns during his time with the Bengals and led them to the playoffs in four consecutive seasons from 2011-14.

Dalton has been selected to the Pro Bowl three times.

“You absolutely hate it for Dak,” Dalton said. “The way that he was playing this year and everything he’s put into it, I hate to see that for him. It’s emotional. … It’s been a lot of fun to be around him ever since I got here, just to see how he works and how he prepares, and you can see just the way he was playing this year.”