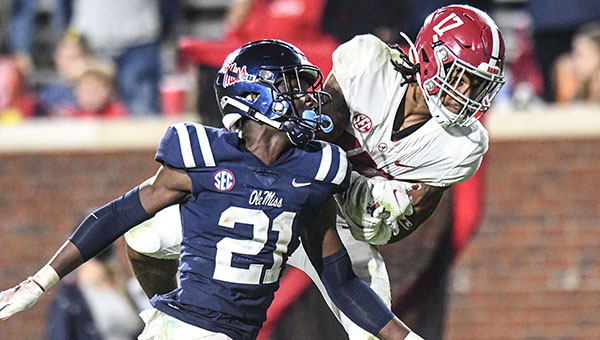 Matt Corral passed for 365 yards for Ole Miss (1-2) and the Rebels put up 647 yards on the Tide. The teams combined for an SEC-record 1,370 yards, which was also a conference record.

The 647 yards Ole Miss had were the most an Alabama defense has ever given up, beating the previous mark of 630 by Auburn in 2014. Ole Miss scored the most points against Alabama as an unranked opponent in the AP Poll era that began in 1936.

“We knew we had to score pretty much every possession,” said Tide quarterback Mac Jones, who completed 28 of 32 passes for 417 yards and two touchdowns.

Alabama and Ole Miss traded touchdowns for much of the night, but with the Tide (3-0) leading 49-42 the Rebels misfired in Alabama territory and had to settle for a field goal. That was as good as a stop in this game. Tide receiver DeVonta Smith went 14 yards for a touchdown run to make it 56-45 with 3:16 left.

After another Ole Miss field goal, Alabama recovered an onside kick and Harris busted a 39-yard touchdown run moments later to seal it.

“We scored every time we had to score,” Tide coach Nick Saban said. “We took the air out of it at the end of the game.”

Kiffin, who was offensive coordinator under Saban at Alabama from 2014-16, became the latest former Saban assistant to come up short against the old boss.

Saban improved to 21-0 against his former assistants, but he did suggest Kiffin and his staff might have been able to decipher the Tide’s defensive signals.

But Kiffin’s offense made the Tide work hard. The Rebels got nearly 250 rushing yards and four touchdowns from Snoop Conner (128 yards) and Jerrion Ealy (120). The two 100-yard rushers has never happened to a Saban-coached Alabama team. Wide receiver Elijah Moore hauled in 11 catches for 143 yards, and Kenny Yeboah caught seven passes for 181 yards and two touchdowns.

“We’ve never played this way on defense,” Saban said. “It’s certainly not what we try to aspire to be as a defensive team. I believe in our players. We have to get our players to play better. I think we’re capable of it.”

LEXINGTON, Ky. (AP) — Terry Wilson threw a second-quarter touchdown, and Chris Rodriguez rushed for another after the first of... read more