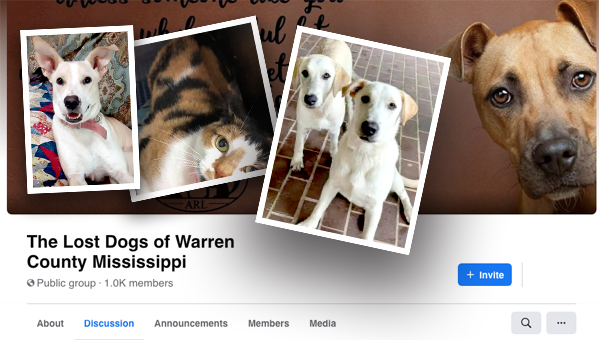 Facebook page seeks to reunite lost pets with their families

Lost or homeless animals need a way to find their way back home. And, even though animals themselves might not be able to browse Facebook, those who can help them find their way home are.

More than two years ago, Mary Odell saw there was a need to better organize the community to help recover and return lost animals to their owners. As part of that work, a Facebook page was created, The Lost Dogs of Warren County.

To date, hundreds of animals have been either returned to their owner or found new homes.

“This is a Facebook page where people can come and post when animals have been lost,” Odell said. “Or, if they see an animal in need, they can post to the page.”

Odell, who is an animal lover, said she started the Facebook page because she was tired of seeing so many dogs and cats roaming the streets of Vicksburg and Warren County and nobody taking care of them. She also wanted to provide a means for pets to be found.

Odell said the page is not associated with either the city’s animal shelter or the Vicksburg Warren Humane Society.

“It’s just me and my friends,” Odell said. “We just all love animals.”

Once an animal has been found roaming the streets and been posted to the page, Odell said she and her friends then try to find them homes and provide any medical treatment that might be needed.

“Sometimes we just get in our own vehicles and drive to the areas where the dogs were last seen and try to find them,” she said. When a dog is found, Odell is prepared. She said she always carries dog food in her car.

Odell recalled a feral dog she has been trying to catch.

“I have tried and tried to catch him. He was born wild and has a broken leg and he has been living like that for as long as I have been here, which is about five years,” she said.

Odell said the Facebook page has been a great way to network.

“As soon as somebody finds out about an animal we start messaging everybody we know that knows anybody, and then it goes on from there, so it’s like unlimited,” she said.

ERDC to induct two into the Gallery of Distinguished Civilian Employees