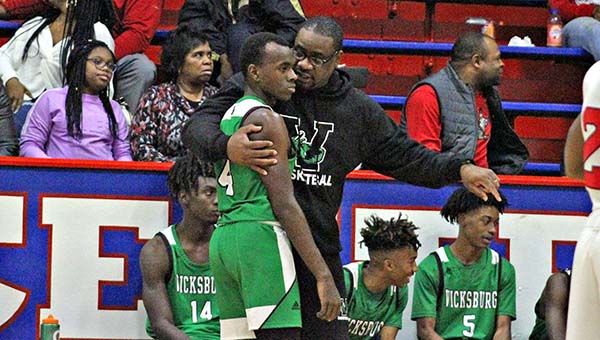 When his phone rang last week, Kelvin Carter did not immediately recognize the number. He answered anyway, and was taken aback when he heard the news on the other end of the line.

The Vicksburg High boys basketball coach, in only his third season leading the program, had been selected to coach in the 2021 Mississippi Association of Coaches North-South All-Star Game.

“I was blown away. I just didn’t see it coming,” Carter said. “I was in the driver’s ed car and told the student you’ve got to pull over so I can recompose myself.”

Carter will coach the North All-Stars along with Kosciusko’s Eleazarus Greenleaf in the Class 4A-5A-6A game on March 20, 2021 at Mississippi College.

He is the second Warren County coach in two years to be selected for one of the state’s all-star games. Warren Central’s Bruce Robinson served as the head coach for the Mississippi-Alabama All-Star Game in 2020.

Carter was an assistant at Vicksburg for 12 years before taking over as head coach when his mentor, Dellie C. Robinson, retired in 2017. He has led the Gators to a 50-38 record over the past three seasons. They finished 20-10 and reached the second round of the MHSAA Class 5A playoffs during the 2019-20 season.

Despite his success and the upward trend of the Gators under his leadership, he said he was surprised to be picked this soon. All-Star coaches cannot be picked for the all-star game until their third year at an MHSAA school.

Coaches receive an honorary $175 bonus from the MAC for their selection, but Carter said the prestige that comes from it was a bigger reward.

“It’s a very big honor. I’ve been working hard to get kids to school and to the Coliseum, and to be one of the coaches selected, it’s a big honor,” Carter said. “I’ve been on this road a long time as an assistant, and sometimes I have to pinch myself to remind myself I’m the head coach.”