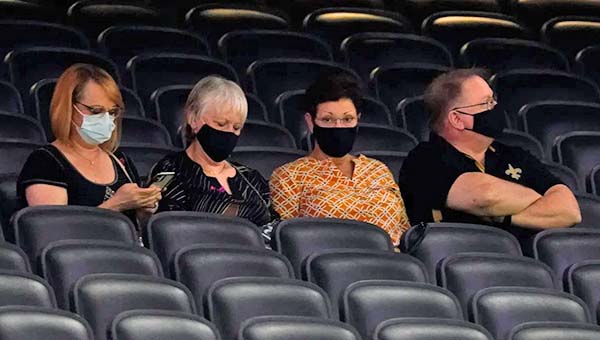 “LSU has been gracious and enthusiastic regarding hosting our future games and we very much appreciate their partnership,” said Greg Bensel, the Saints’ senior vice president for communications. “We have also discussed the possibility of moving our home games to LSU with the NFL and they are aware of our exploring this option.

“Obviously, our overwhelming preference is to play our games in the Mercedes-Benz Superdome with partial fan attendance but there has been no indication from the city on when, or if, this might be approved,” Bensel added.

The Saints have played three of eight scheduled regular season home games in the Superdome so far this season with no ticketed fans in attendance, including a 30-27 overtime win against the Los Angeles Chargers on Monday night. The few hundred in attendance consisted primarily of privately invited family members of players, coaches or staff.

The Saints had placed a request with New Orleans Mayor Latoya Cantrell to allow ticketed fans to occupy about 25 percent percent of the Superdome’s 73,000 seats while wearing masks and following other social distancing guidelines during Monday’s game against the Chargers. The Mayor denied that request.

“While the Saints’ request for a special exception to the city’s COVID-19 guidelines remains under consideration, allowing 20,000 people in an indoor space presents significant public health concerns,” said Beau Tidwell, Cantrell’s director of communications. “At present, no NFL stadium in the country with a fixed-roof facility is allowing such an exception. We will continue to monitor the public health data, but cannot set an artificial timeline for how and when conditions may allow for the kind of special exemption being requested.”

LSU’s Tiger Stadium is an outdoor venue seating up to 102,000, meaning it can hold more than 25,000 fans at one-quarter capacity.

With Gov. John Bel Edwards and Baton Rouge Mayor Sharon Weston Broome’s approval, LSU had a little more than 20,000 fans at its lone home game so far this season on Sept. 26. Fans were also expected at Tiger Stadium on Oct. 10 before that game was moved to Missouri because of the threat of severe weather posed by Hurricane Delta.

“Should they choose to come, the Saints and Saints fans will be required to adhere to the same guidelines put in place for college football games — social distancing with 25 percent occupancy, required masks, and no tailgating,” Broome said. “If we all do our part, we can begin to return to normalcy.”

The Saints last played home games at LSU in 2005 when the Superdome was damaged by Hurricane Katrina. That season, the Saints were displaced to San Antonio, which hosted three home games, while Tiger Stadium hosted four. New Orleans also had to move one of its home games to New York that season.

A renovated Superdome re-opened for football in September 2006.

You’re in Four Down Territory. Each week, we’ll highlight four notes, nuggets, stats and trends from the weekend that was... read more