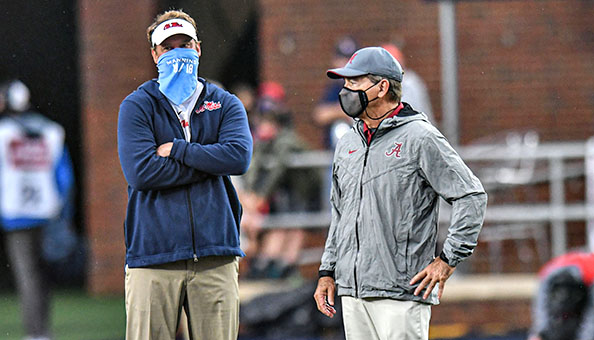 Ole Miss head coach Lane Kiffin and Alabama coach Nick Saban talk before last weekend’s game in Oxford. Saban announced Wednesday that he has tested positive for COVID-19, while Kiffin said Ole Miss is dealing with a spike in cases among its players. (Bruce Newman)

Both said their tests Wednesday morning came back positive, but Saban said he didn’t have any symptoms by late afternoon. The second-ranked Crimson Tide (3-0) is set to face No. 3 Georgia (3-0) on Saturday, and may be without their iconic 68-year-old coach.

“I immediately left work and isolated at home,” Saban said. He remained scheduled to talk to the media Wednesday evening.

Saban said he informed the team via a Zoom session at 2 p.m. Wednesday and that offensive coordinator Steve Sarkisian will oversee game preparations while he works from home.

Alabama defeated Ole Miss 63-48 in Oxford last Saturday. During his Wednesday press conference, Ole Miss head coach Lane Kiffin said his team is having what he called “issues” with COVID-19 for the first time since fall camp. The football program went four weeks without a new positive test before this week. It was unclear, however, whether it was related to the positive tests within Alabama’s program.

“For the first time, we are having issues with that,” Kiffin said. “We have a number of guys out. I’m not going to get into numbers. We have not had that in-season. We had that during camp. This is the first time dealing with it in the season.”

The Rebels’ game in Fayetteville against Arkansas on Saturday is still on as of Wednesday afternoon. Kiffin said they could “play today,” but they will have to keep those players healthy and avoid further positive tests for a few more days.

A decision to postpone and reschedule the game would have to come sometime before Friday, when the team would presumably travel to Arkansas.

The positive cases have caused a shift in where players have been practicing this week, according to Kiffin. He would not say where the outbreak may have originated, but did not believe it started while the person was in Oxford.

“It’s very difficult,” Kiffin said. “And we’re beat up, too, from the high play count and intense game versus a great team on Saturday. We’re not in a great place number-wise at all.

“I said Monday in our first meeting, ‘It just got real.’ So anytime you talk about things, it doesn’t hit home until it happens to you. Now they’re seeing it and seeing depth charts move and people have to change positions and different things. I hope it really was a better reminder. Only takes one person to really screw it up.”

Earlier this week, Vanderbilt’s game at Missouri was postponed to the built-in bye week of Dec. 12 due to the an outbreak among Vanderbilt’s players. On Tuesday, it was revealed that at least 19 players on Florida’s team had tested positive and head coach Dan Mullen confirmed on Wednesday that two assistant coaches had tested positive. The Gators’ home game against LSU on Saturday was also postponed until Dec. 12.