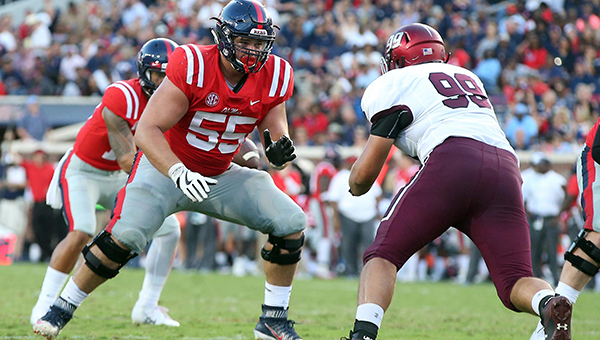 Ole Miss offensive lineman Ben Brown (55), a former St. Aloysius star, has been selected to the Rimington Trophy watch list. The award is given each year to the top center in Division I college football. (Ole Miss Athletics)

OXFORD — Ben Brown switched positions this season, but he’s still being regarded as one of the best offensive linemen in college football.

The Ole Miss junior and former St. Aloysius star has been named to the watch list for the 2020 Rimington Trophy, which honors the top center in the Football Bowl Subdivision.

Announced by the Rimington Trophy Committee on Wednesday, the list includes at least one player from every FBS conference. A total of 90 players are on the watch list.

Brown has started in 27 games over the first three seasons of his Ole Miss career — the first 24 at right guard, and three this season at center. He has started every game of his college career, and was selected to the Southeastern Conference’s All-Freshman team in 2018.

Brown has helped Ole Miss’ offense to get off to a fast start this season. Through three games, the Rebels are averaging 41.6 points and an SEC-best 573 yards per game. They are scheduled to play at Arkansas Saturday at 2:30 p.m.

The Rimington Trophy committee uses three prestigious All-American teams — the Walter Camp Foundation, Sporting News and Football Writers Association of America — to determine its winner. The center with the most first-team votes will be determined the winner. If there is a tie with first-team votes, then the center with the most second-team votes will win. If there is still a tie, the winner will be determined by a majority vote from the Rimington Trophy committee.

Because the selectors of these three All-America teams can place centers in a “mix” of offensive linemen that includes guards and tackles, their 11-man first teams can often have two centers. The Rimington Trophy committee’s policy is to count all players that play primarily the center position for their respective teams as centers, even though they may be listed as guards or tackles on the All-America teams.