PCA trying to break through a ‘mental wall’ against Glenbrook 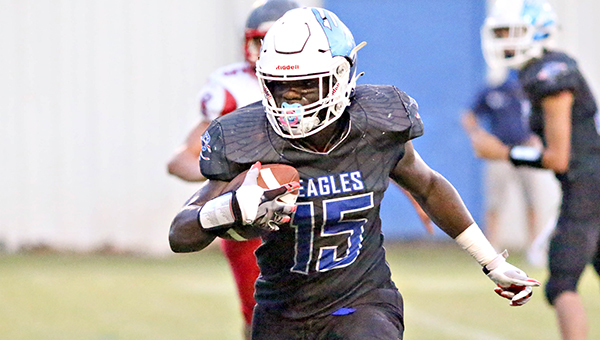 There is not much question that Friday’s game against Glenbrook Academy is the biggest of this season for Porter’s Chapel Academy. A win would likely put the Eagles into the MAIS Class 3A playoffs for the first time since 2014, and secure at least a .500 record for only the fourth time in the last 12 years.

More than that, PCA coach Blake Purvis said, it’s a chance to break down a “mental wall” that has blocked the program from moving forward. Glenbrook is one of three talented opponents in District 4-3A, and Purvis said a win Friday night would show the Eagles are a team on the rise rather than the same old also-ran that has finished last in its district four times in the last six years.

“Our thing is, we have to get over the mental wall that we have up against these teams. We have to understand that we are improved, and we are better, and we can compete with these guys,” Purvis said. “It would validate the work that’s been put in. We mathematically and realistically are still in the playoff hunt and beating a playoff-caliber football team, regardless of how the math shakes out in the next two weeks, at this point in the season is huge for us the rest of this year and moving into the offseason and next season.”

PCA (4-4, 0-1 District 4-3A) is currently 14th out of 17 teams in the MAIS Class 3A power point rankings that determine wild card berths and seeding. Twelve teams advance to the playoffs.

PCA can still earn a berth, but needs to beat either Glenbrook (3-3, 0-1) this week or three-time defending Class 3A champion Greenville-St. Joe (5-1, 1-1) in next week’s regular-season finale to do it.

“We’ve got to win to stay alive. I guess if one win gets you in, one win against either of these two gets you in,” Purvis said.

At a glance, it seems like this week will be the more attainable victory of the two. Greenville-St. Joe has won the past three Class 3A championships, beat PCA 56-0 last season, and only has one loss this year.

Glenbrook is often in the playoffs, but has had an up-and-down season, losing three in a row after winning its first two games. The Apaches beat Amite School Center 56-18 last week to snap out of their funk.

PCA has also seen Glenbrook already this season. The teams played each other in a preseason scrimmage in August. No official score was kept, but the general consensus coming out of it was that PCA more than held its own against a team it lost to 39-0 last season.

“We’ve already seen them. We scrimmaged them early in the year. So hopefully that helps us mentally, knowing we can have success against these guys,” Purvis said. “But as we knew coming into this three-game stretch, none of these games are easy. We’re going to have to play sound football. We can’t make mistakes, and we’re going to have to be efficient offensively.”

Purvis was hopeful that the mental confidence his Eagles gained from the scrimmage was more beneficial than any tactical insights. With the season — and so much more — on the line, it could be the difference between ending a six-year postseason drought and spending another Halloween weekend at home.

“We definitely know that we’re better than we were. On the flip side of that is, they’re going to be better than they were. That was the first scrimmage for both of us, on limited practice coming out of COVID and quarantine and all that,” Purvis said. “I hope that seeing them early helps us to break down that mental wall that we have against our district opponents. That we have confidence and believe that we can compete when we walk out onto the field.”