Playoff berth on the line for St. Al at Washington 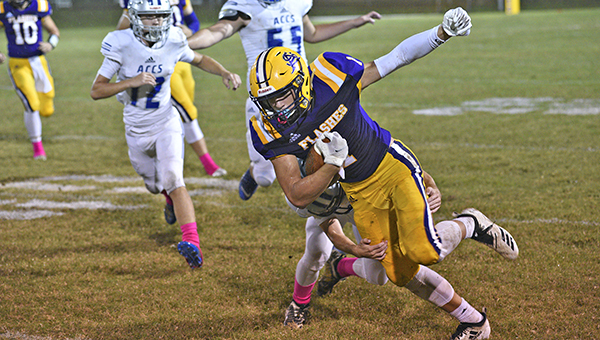 It’s been a long, uneven, and sometimes downright strange road for the St. Aloysius Flashes this season. They’re arriving at the end, however, exactly where they wanted to be when it started — with a chance to play meaningful football in October and possibly reach the postseason.

The Flashes (3-5) are tied for 12th in the MAIS Class 5A power points ranking, which would narrowly put them in the playoffs if they started this week. They don’t, of course. There are still two games remaining, this week at Washington School (1-6) and next week at Cathedral (7-1). St. Al needs to win at least one of them to solidify its postseason footing.

“It’s always good to have something to say that we have a chance to do it if we take care of our business. It’s not one of those things where we’re mathematically out of it, and you’re just playing for pride at that point,” St. Al coach Stacy Sizemore said. “What I tell our kids all the time is, you never know when your opportunity’s going to come. But you need to be prepared for it.”

Two of St. Al’s three wins came via forfeit, during a six-game stretch in which it scored a total of 12 points on the field. Those victories, coupled with a 38-0 blowout of Silliman on Oct. 2, put the Flashes into playoff contention.

The Silliman victory also seemed to mark a turning point for the team. After only scoring one touchdown in its first six games, St. Al has scored eight touchdowns and 61 points in the last two.

Despite losing 43-23 to Adams County Christian last week, Sizemore said there has been a noticeable improvement in his team’s recent play.

Running back Brennan Williams has rushed for 227 yards and four touchdowns in the past two games, and is averaging 5.7 yards per carry. As a team, St. Al has averaged nearly 200 rushing yards against Silliman and ACCS.

This week’s game against Washington School provides another opportunity to not only get better, but to win. The Generals have lost six in a row since beating Centreville Academy 43-40 in the opener, and have scored a total of 52 points in their losses.

Washington has been beaten up the last two weeks by a pair of MAIS powers, losing 49-6 to No. 3 Leake Academy and 42-0 to No. 2 Jackson Prep. It’s still 13th in the Class 5A power points standings and could salvage a playoff berth by beating St. Al this week and Heritage Academy next week.

“We match up well with them. They’ve had some injuries just like we’ve had some injuries. It’s (record is) probably not indicative of what they truly are, if that makes sense. They lost their starting quarterback and he’s a really good athlete,” Sizemore said. “I think this is one where we match up and we legitimately have a chance to win the game. That’s all I’ve ever asked for is to be in a situation where we can compete with the other team and if we win, we win and if we lose, we lose, but at least we’re out there competing.”

On another positive note, Sizemore said the Flashes are getting a bit healthier. Sophomore linebacker Will Dowe and senior lineman Ben Raines both returned to practice this week after missing several games with injuries.

The Flashes are still without five other injured starters, but Sizemore said getting Raines — who has missed most of the season — back was a particularly big boost for an offensive line that has struggled at times.

“Getting an experienced lineman who’s a senior, who is motivated to be back out there to try and finish the season with his teammates, that helps,” Sizemore said.

Sizemore added that the injuries have played a big role in St. Al’s uneven season. Most of the injured starters have missed multiple games, which has forced other players out of more comfortable positions to plug the gaps.

“It’s pretty difficult to adjust, because we don’t have the luxury of having backups at every position. In order for us to have a backup at another position, then it may be a kid that’s already starting — like an outside linebacker who goes to middle linebacker, or a safety that’s a backup to your defensive end,” Sizemore said. “It’s a lot of moving parts when we have somebody go down, as opposed to a big school where they have the next man up in that position. When we have a guy go down it’s a major deal because we’re having to move six different parts to get to where we want to get to and sometimes kids aren’t used to playing there after they’ve been playing a different position all year.”