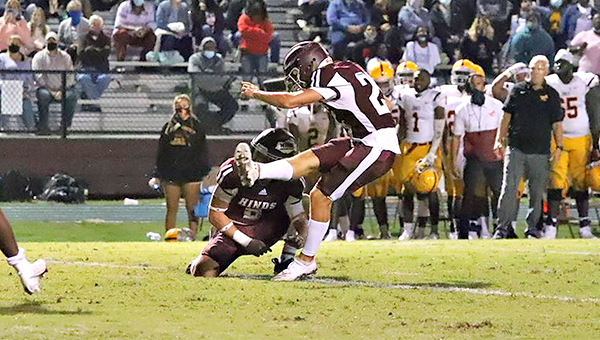 RAYMOND — The best game of Connor Smith’s college football career ended with a moment he might never top.

The former St. Aloysius star kicked four field goals, including the 25-yard game-winner as time expired, to give Hinds Community College an 18-16 victory over Jones College on Thursday night.

Hinds quarterback BeSean McCray threw a 49-yard touchdown pass to Jeffery Malone with 47 seconds left in the game, but the extra point was blocked to leave the score at 16-15.

Hinds was able to recover the onsides kick, however, and embarked on the winning drive. McCray threw a 23-yard pass to Jaiden Burns inside the 10-yard line set up Smith’s winning kick in the final seconds.

McCray finished the game 41-of-74 passing for 421 yards and one touchdown. His yardage total and number of passing attempts are both Hinds single-game records.

Hinds ran 96 plays from scrimmage and had 440 total yards, but did not score a touchdown until the final minute of the game. It only had 19 rushing yards on 21 attempts.

Romal Webb rushed 25 times for 141 yards and a touchdown to lead Jones (1-1). Quarterback Quaterius Hawkins was 13-of-29 passing for 123 yards and one touchdown. Jones only had two first downs in the second half.

Zacchaeus Burnett recovered a fumble in the end zone for Coahoma’s only touchdown.

Hiers threw a 21-yard TD pass to D.T. Sheffield and a 73-yarder to Keyon Fordham to give Northwest a 16-0 lead with 2:05 remaining in the first quarter. The Rangers never scored again, though, and Itawamba (0-2) mounted a comeback.

Northwest missed a field goal on its next possession, and Itawamba got the ball back with 6:33 to go. The Indians converted two third downs on a 15-play drive, but used up the entire clock to reach only the 30-yard line. Shane Lasher attempted a 47-yard field goal that was blocked as time expired, and Northwest escaped with the win.

PCA trying to break through a ‘mental wall’ against Glenbrook

There is not much question that Friday’s game against Glenbrook Academy is the biggest of this season for Porter’s Chapel... read more