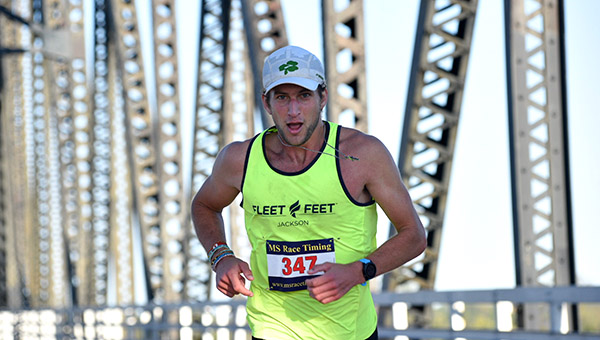 Peter Kazery runs on the Old Highway 80 Bridge during the 32nd annual Over the River Run on Saturday. Kazery clocked a time of 27 minutes, 22 seconds to win the 5-mile run for the second time in four years. (Courtland Wells/The Vicksburg Post)

Looking around the parking lot at the Mississippi Welcome Center on Saturday morning, Peter Kazery got a little emotional.

It was a very good morning to add to a long collection of pleasant memories.

Kazery smoked the field at the Over the River Run, completing the 5-mile course in 27 minutes, 22 seconds to win it for the second time in four years. Afterward, he dedicated the victory to his parents, Don and Terri. The latter has been battling health issues for the past year, Kazery said.

“It’s just awesome to have them put me in the position to run. With all the times that are going on now, it’s awesome to have that road laid for me to be on,” Kazery said. “My dad is the reason why we’re out here. Running is a lifestyle, regardless of whether you win. I had to work to be as good as I’ve gotten, and I know there are still people way better than me.”

Kazery, a Clinton native, added the 2020 Over the River Run title to his 2017 trophy. Dillistone, a former Southern Miss track and cross country runner, won the women’s championship on her first try.

Dillistone posted a time of 34:41, 20 seconds ahead of women’s runner-up Kristi Hall, and finished eighth overall.

“We do a lot of running together, so it’s nice to race. I haven’t raced in a while, so I couldn’t let him have all the fun,” Dillistone said. “I tried to stay real relaxed in the beginning, stayed steady and keeping at speed, and then once we hit the 2 ½ (mile) turnaround I tried to pick it up a little bit. I did lose some momentum coming back. The hills were against us coming back. I had some good people to run with, so that helped a lot.”

Kazery’s time was about 30 seconds slower than the one he won with in 2017, but still more than good enough to win easily. Runner-up Ryan Crandall came across the finish line more than a minute later, in 28:33. Caleb Hammons was third, in 28:48. No one else had a time under 32 minutes.

“It’s a good benchmark. I’ve run faster. It’s definitely a great day to go running,” Kazery said. “I was sub-five the first mile. I cashed in while the road was in my favor.”

Kazery has made his mark more often in Vicksburg’s other major road races. He has won the Run Thru History 10K three years in a row, and he is a two-time winner of the Chill in the Hills 10K. Schedule conflicts have often kept him from competing in the Over the River Run — a 5-mile race across the Old Highway 80 Bridge and back — but he says he still has good memories of coming to Vicksburg for this and other races.

“It’s a great place to come run. I come here just to see Vicksburg. It’s a good place where I’m going to show up and there are going to be other people to challenge and make me run better,” Kazery said. “I grew up coming to this race. There are a lot of good memories. It’s always good to come out and run, and be in this environment.”

In the 5-mile race walk, Larry Robinson also made another happy memory by winning for the eighth time overall, and third year in a row. His time of 50:17 was nearly three minutes better than runner-up Paul Adams, who clocked in at 53:!5.

Angel Curry was fourth overall, and won her fifth women’s title, with a time of 57:26. Jennifer Mallard was the women’s runner-up and sixth overall, in 58:57.

“2020 has been a challenging year. The pandemic has shut a lot of races down. You don’t get that conditioning like you used to when you’re doing races every week. I was glad to see everybody back. It felt good,” Robinson said. “This is only the third race in all of 2020 for me, because everything else was canceled. That was hard. That was the first time I’ve done anything since the Run Thru History.”

Robinson said he had an awkward moment at the midway point of the race when, despite having a sizable lead, he had to catch and pass another walker.

Competitors started the race in wave starts of about 20 people each because of COVID-19 restrictions. They are timed with electronic chips that activate as they cross the starting line, so no one gets a head start even if they start the race first. It took about six minutes for all of the nearly 300 runners and walkers to pass the starting line, and one of them had gone out before Robinson.

Robinson, who is one of the best race walkers in Mississippi, was taken aback as he approached his new rival.

“It was kind of unusual to see a walker ahead of me,” Robinson said with a laugh. “I was coming down and remembered he started with the runners because of the chip timing. I had to catch him. He pushed me. When I got beside him he said, ‘What’s your name?’ I said, ‘Larry,” and he said, ‘Good job,’ and I took off.”