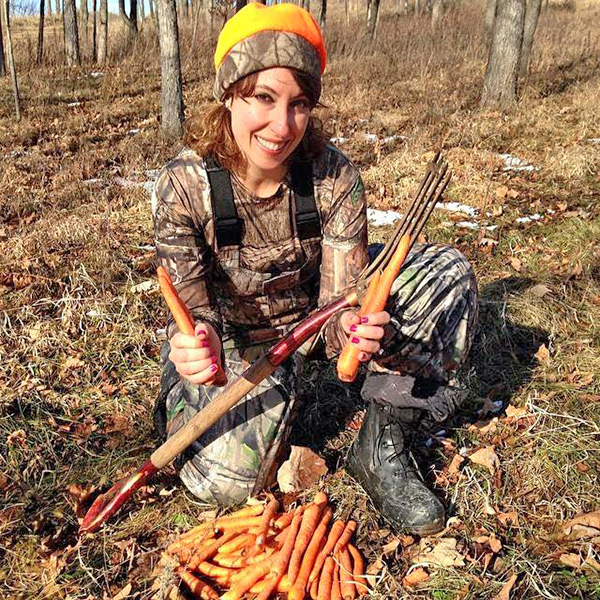 Melissa Karpel, a self-described “vegan hunter” from Wisconsin, shows off a flock of carrots that she harvested near her home. (Submitted to The Vicksburg Post)

Sports column: Vegan hunting photo shows how much the journalism world has changed

My call for readers to submit their hunting photos a couple of weeks ago brought an unusual and humorous submission.

Melissa Karpel, a self-described “vegan hunter” from Wisconsin, somehow saw the column and sent in a picture of herself in the woods, wearing hunting gear and standing over a harvest of carrots. We normally reserve the “Trophy Case” photo for local hunters, but I couldn’t resist running this one both as a bit of a goof and because it made me think about how the newspaper industry has changed in the 22 years I’ve been at The Vicksburg Post.

When I started working here as a wee lad in the summer of 1998, The Post had a respectable reach for a small-town paper. If you drew, roughly, a 40-mile perimeter around Vicksburg — up to Rolling Fork and Lake Providence on the north side and down to Port Gibson and St. Joseph, La., in the south — you were in our delivery circulation area. We did not have a website until the early 2000s, so the only way to read our paper was to buy a print copy. If you didn’t live inside that circle, you probably missed it.

For a number of reasons, that circle shrank over the years. At the same time, however, a bizarre phenomenon occurred. Thanks to the Internet and social media, our circulation circle grew exponentially. Instead of having to be inside that 40-mile radius on a given day to read a story, you could see it from anywhere in the world at any time.

You could even email a photo of carrots you killed in Wisconsin, to a paper in Mississippi, in reference to a random column asking for hunting photos.

The print circulation of The Vicksburg Post, like all other newspapers in the United States, is not what it was 20, 30, 40 or 50 years ago. The twist, however, is that in 2020 we reach more people in more places than ever before.

Our overall circulation now is easily two or three times what it was when I started working here when you combine the number of people accessing our web site and buying the print edition each month. A list of which stories are currently being viewed on our web site often turns up an older article someone is referencing. As Melissa Karpel’s “hunting” photo shows — as well as a number of other emails from former residents of Vicksburg who remain loyal readers — we’re also being seen all over the country and the world.

It really is remarkable how much and how fast the world has changed in just a couple of decades. That’s true, no matter where or when you’re reading this. Thank you for sticking with us, and let’s see what the next couple of decades have in store.