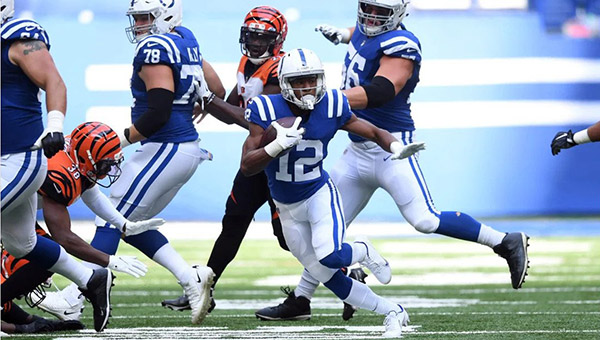 You’re in Four Down Territory. Each week during football season we’ll highlight four notes, nuggets, stats and trends from the weekend that was in Mississippi high school football, college football, and the NFL.

1
DeMichael Harris did not get on the field a lot during his NFL debut, but certainly made the most of his limited opportunities.

Harris, a Vicksburg native, was elevated from the practice squad to the active roster for the first time this season for Sunday’s game against Cincinnati. He was on the field for 12 of the Colts’ 63 offensive snaps, as well as six special teams plays, and finished with three receptions for 29 yards.

All three of Harris’ receptions came on scoring drives as the Colts dug out of an early 21-point hole to beat the Bengals 31-27.

Harris’ first NFL catch came midway through the second quarter, a 13-yard gain that resulted in a first down during an Indianapolis touchdown drive. His second reception was a 10-yard gain in the third quarter. Harris was pushed out of bounds at the Cincinnati 16-yard line, and two plays later Phillip Rivers hit tight end Jack Doyle for a 14-yard touchdown to put the Colts ahead 28-27.

Harris’ final catch was a 6-yard gain in the fourth quarter, during a drive that led to a Colts field goal.

It was a solid debut for the former St. Aloysius, Hinds Community College and St. Aloysius star, but it remains to be seen whether it will lead to a bigger role with the Colts. NFL teams are allowed to promote and demote players from the practice squad on a weekly basis this season, so Harris’ time on the active roster could depend on the team’s needs from week to week. He is currently one of seven wide receivers on the active roster.

2
The Vicksburg Gators piled up 274 rushing yards — the fourth time in five games they’ve had at least that many — and put together a spirited fourth-quarter comeback against Ridgeland on Friday night.

Unfortunately, the Gators did not have an answer for Ridgeland quarterback Zy McDonald.

The four-year starter finished with 398 passing yards and seven touchdowns, and added 106 yards and one TD rushing as the Titans beat the Gators 49-32. It was the second time this season that McDonald has thrown for 300 yards and run for 100 in the same game.

McDonald just missed the third 400-yard passing game of his career, but did surpass the 300-yard mark for the 10th time. Four of those have come this season. The seven touchdowns were a career high.

In his career, McDonald has thrown for 9,680 yards and 88 touchdowns. He ranks third all-time among Mississippi high school quarterbacks for career passing yardage, trailing Myles Brennan (15,138) and Dylan Favre (12,559), both of St. Stanislaus. He is sixth on the career touchdowns list.

“That kid is probably the best quarterback in the state of Mississippi, and he has two receivers that can catch it if it touches their hand,” Vicksburg coach Todd McDaniel said.

3
Tennessee Titans running back Derrick Henry has emerged as the NFL’s top running back over the past two seasons, and earned a place in league history Sunday against the Houston Texans.

Henry broke free for a 94-yard touchdown run in the fourth quarter of the Titans’ 42-36 overtime victory. It was the second time in his career he has had a touchdown run of 90 yards or more, making him only the fifth player in NFL history to accomplish the feat.

The other four are Bo Jackson, Lamar Miller, Ahman Green and Chris Johnson. Johnson, coincidentally, also had both of his long runs while playing for the Titans — a 91-yarder in 2009 and a 94-yarder in 2012.

Henry tied an NFL record with a 99-yard touchdown run against Jacksonville in 2018.

Henry finished with 212 rushing yards, 52 receiving yards, and two touchdowns Sunday against Houston — he also scored the game-winner on a 5-yard run in overtime — to give the Titans another place in the NFL record books. It was the first time in league history that a team has had a 200-yard rusher and a 350-yard passer in the same game.

4
Mississippi State set a host of Southeastern Conference and school records when it debuted the Air Raid offense in a season-opening 44-34 win over LSU. Since then, opposing defenses have put up a wall of anti-aircraft fire that has ripped the Air Raid to shreds.

The Bulldogs lost 28-14 to No. 11 Texas A&M on Saturday, for their third loss in a row. Quarterbacks K.J. Costello and Will Rogers have combined to throw 10 interceptions during the losing streak, including two that were returned for touchdowns.

Worst of all, the Bulldogs have not put points on the board. Since scoring 44 against LSU, they have totaled 30 points in the three-game losing streak — nine of which were scored by the defense on a safety and an interception return touchdown.

“I think some guys have stage fright. I think some guys are so eager they try to do too much. Basically, what we are doing is new to them to begin with,” Mississippi State head coach Mike Leach said. “I think stage fright, doing too much. We have to be able to control and monitor that somehow. We have to be able to reach them. The other thing is that they get out there under the lights, and they are excited. I think some of the clarity in their minds in practice does not exist in the game. Certainly, it did not today.”

Mississippi State has an open date next Saturday before going on the road to play Alabama on Oct. 31.