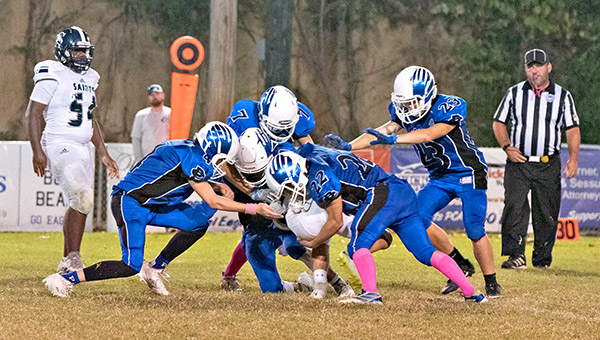 Nearly every week this fall, Porter’s Chapel Academy’s freshman football players had a difficult task. On Thursday, they played a full four quarters of junior high football. Then, on Friday, they suited up for the varsity team.

The latter could have gone better, but on Thursdays they were untouchable.

The victory capped a remarkable three-year turnaround for PCA’s junior high program. It did not win a game in 2018, went 4-3 in 2019, and then was undefeated this season.

“Those guys earned every bit of what they got,” PCA coach Blake Purvis said. “That group came in as seventh-graders and went winless. We practiced a lot more with the high school trying to make a big step, and they did it.”

A large portion of the junior high team, which has a total of 17 players in grades 7-9, also did it while pulling double duty with the varsity. Six of the team’s 10 ninth-graders were contributors to the varsity squad.

Running back Brayson Morson has scored six touchdowns with the varsity, which has a 4-5 record heading into Friday’s regular-season finale against Greenville-St. Joseph.

The junior high players are only allowed to play two quarters with the varsity during weeks when they also play a junior high game.

“We had six of our 10 ninth-graders who were pulling double duty. There was a lot on those guys, with preparing for an eight-man game on Thursday and an 11-man game on Friday,” Purvis said. “I can’t say enough about that class and how they built themselves into winners. It was a steady stream of improvement and success.”

The junior Eagles also weathered some adversity and uncertainty during the season. Several games were canceled or rescheduled because of COVID-19 concerns. Two of their seven victories were forfeits. On the field, they defeated Tensas Academy, Sharkey-Issaquena Academy, Deer Creek and Franklin Academy in eight-man games, and finished by knocking off St. Andrew’s in an 11-man game.

“They responded every week, they adjusted and they played,” Purvis said. “It didn’t matter where or when we were playing. That’s a huge positive to see out of a young group.”