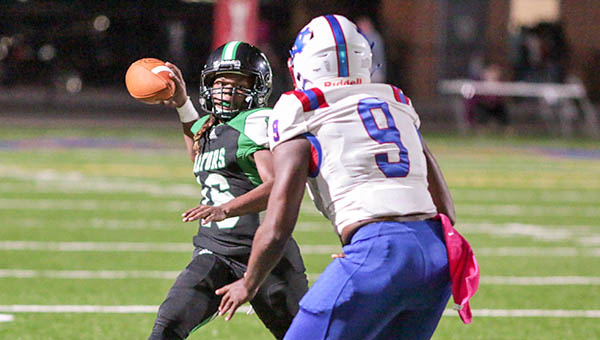 Vicksburg High quarterback Ronnie Alexander, left, throws a pass against Neshoba Central earlier this season. Alexander and the Gators will host Canton Thursday night at 7 for homecoming. The game will be played at Warren Central. (Walter Frazier/For The Vicksburg Post)

As the season has unfolded, the Vicksburg Gators have started to cast an eye toward the future.

A half-dozen freshmen have found their way into the starting lineup and played well enough to stay there. Incremental improvements and competitive games are seen as hope for a better tomorrow.

In the present, though, there are still a couple of games left to play and a chance to secure a playoff berth. The Gators need to win the rest of their games, beginning Thursday night against Canton, to do it.

VHS and Canton will play Thursday at 7 p.m. at Warren Central.

“We’re still alive. We have to win out. It’s a doable task. All we have to do is go out and play and execute,” Vicksburg head coach Todd McDaniel said.

Vicksburg has a record of 1-6 overall on the field, but will officially have at least two Region 2-5A victories after next week’s open date. The Gators were supposed to play Callaway, which opted out of the 2020 season because of COVID-19 concerns. They also received a forfeit win over Provine for the same reason.

Canton is 1-4 overall, but 2-3 in the region standings because of the forfeit wins. That makes Thursday an elimination game for both teams, as well as a chance to pick up needed wins and end losing streaks. Vicksburg and Canton are both on three-game skids.

“We can’t overlook anybody,” McDaniel said. “When you’re building a program, the kids tend to do that, and whether you’re 13-0 or 1-5 you have to go and play to win the football game.”

The Gators have not had much luck recently, although they have certainly improved from the early part of the season. After suffering back-to-back shutout losses in the first two games, three of the last five have come down to the final play.

The Gators have averaged 296.8 rushing yards and 22.8 points per game over their last five outings. They had 274 rushing yards last week in a 49-32 loss to Ridgeland.

“Drastic improvement,” McDaniel said of his team’s recent offensive effort. “We’ve asked the kids for four yards per carry and the last two weeks we’re averaging 10 yards per carry. Hopefully we can continue to do that.

“The switch is we’re understanding how to execute,” McDaniel added. “You take a team that’s been a spread offense and switch to a run-oriented offense, and you expect to stumble a little. I knew it would be a four-to-six game process. Now, when I’m calling plays, I have total confidence that we can run whatever I call.”

Helping in the surge has been a cast of talented young players. Ronnie Alexander took over as the starting quarterback in Week 2 and has played well. Fellow freshman Alex Jefferson scored two touchdowns last week against Ridgeland, and several other freshmen and underclassmen have stepped into big roles as well.

At the same time, upperclassmen like seniors Sha’Kori Regan and Keveon Smith, and junior Laurence Sullivan have continued to break off big runs and be productive.

Even if the wins have been slow in coming, it’s given McDaniel confidence that they are indeed coming at some point.

“We’re building a foundation for years to come. Being able to blend in the young guys with the others has helped,” McDaniel said. “I’m totally elated that they’re (upperclassmen) buying into the program.”