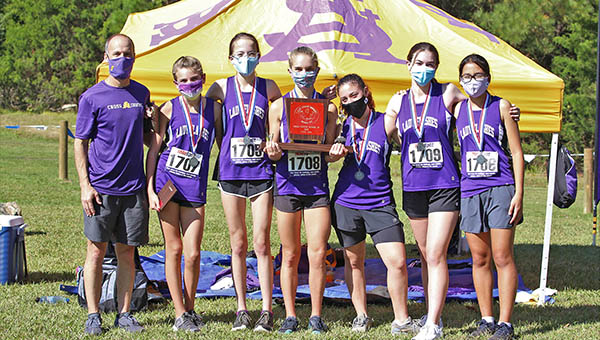 St. Aloysius stocked the top 10, and finished in the top two at the MAIS Class 4A girls’ cross country meet on Tuesday.

Nancy Clement finished fourth overall, and Rachel Garmon and Hendrix Eldridge were sixth and seventh, respectively, to lead St. Al to a second-place team finish in the state meet at Choctaw Trails in Clinton.

St. Al totaled 66 points to finish second in the team standings for the second year in a row. Simpson Academy won its second consecutive team title with 51 points, after putting two runners in the top five. Hartfield Academy was third, with 75 points.

St. Al finished fifth in the team standings in the Class 4A boys’ meet, with 139 points. Cathedral totaled 36 points to win its fifth consecutive state championship. Ryan Skates won the individual title with a time of 17:28, and Hartley Pyron finished third to lead the Green Wave. All five of Cathedral’s scored runners placed among the top 14.

Other MAIS team champions in the girls’ meet were St. Augustine in Class 1A, Glenbrook in Class 2A, Columbia Academy in 3A, and Madison-Ridgeland Academy in 5A.

Boys’ champions were Regents of Oxford in Class 1A, Christian Collegiate Academy in 2A, Lamar Christian in 3A, and Jackson Prep in 5A.