Adolph Rose Antiques to close; building to be sold 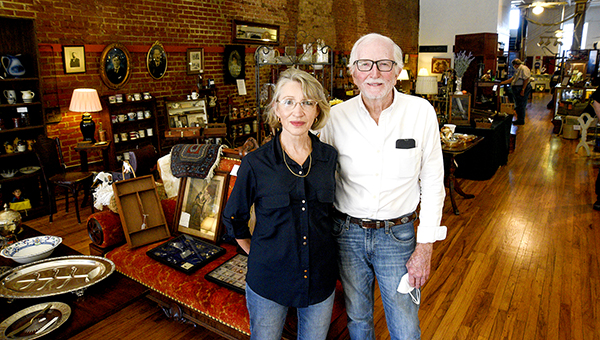 Malcolm Allred and his wife Karen walked through the collection of antiques and collectibles on the first floor of their business, Adolph Rose Antiques.

“We both look at this and we wonder how in the world are we going to dispose of all this,” he said. “If we have an auction, I think it’s probably going to carry on for 3-4 days.”

After more than 20 years in the antiques business, Allred is closing his store and selling the Adolph Rose building that has housed his business interests and been his home since 1993. A specific date has not been determined.

“I just decided it was time to move on,” Allred, who just turned 80, said. The building, he said is under contract for sale.

The Adolph Rose building was named for Adolph Rose, a dry goods merchant who built it at a cost of $30,000 — about $929,571 today. Construction on the four-story building began in 1896 and was completed in 1897. The right side of the building was remodeled into the Strand Theater in 1934.

“Feld Furniture bought the building and they were here about 40 years,” he said. “Then a couple of other fellas bought it and eventually they approached me about buying it. I thought it was a reasonable enough deal that I went ahead and bought it and began the remodeling process,” Allred said.

He began restoring the building in 1992 and has continued to do the maintenance on it, including its 1936 Otis elevator.

“My son and I spent about two years renovating it and I decided I was going to live here,” he said. “I sold my house on Drummond Street and moved in here in 1993.

At the time, I don’t know that anyone else was living downtown; there might have been one other person.”

The Allreds’ apartment is one of two on the third floor; the second apartment is rented out. The fourth floor, which does not span the building, is used as a sunroom.

Living downtown has been enjoyable, the Allreds said.

“We’re living in the middle of downtown. The bank’s across the street, the post office is a block away; there are 4-5 restaurants within easy walking distance. The drug store is right up the street for prescriptions; it’s a great location,” Karen said. “The neighbors are very friendly; there’s a nice hometown atmosphere.”

Besides the apartments, the building housed several businesses, Allred said.

“We had an area (on the second floor) for parties and wedding receptions. We had a café, we had a disco and there was an antique shop prior to this one,” he said. “The café was probably the most successful thing but we kept losing money.”

At one point, Allred said, he leased the building to a couple who operated an antique business for about five years, but when they died, “I decided I’d go and run it itself. My wife and I, and we’ve been selling out of here ever since.

“I’ve always been a collector and it just kind of fit. I tend to buy too much and I buy any kind of vintage antique,” Malcolm said. “I had a house full; it got to the point I had more than I could fit into my house. So I got into the business, buying and selling.”

“Malcolm collected every bit of this,” Karen said. “I don’t believe I contributed a toothpick and I would tell him, ‘Do not buy anything else’ and I would come in that evening and I would find something like Marilyn sitting there. He can’t help it.”

“Marilyn” was a life-size figure of Marilyn Monroe Allred bought. He sold it about two weeks ago.

There is also a large cotton scale destined for a museum and other items covering the store’s two sales floors.

When it comes time to reduce the store’s inventory, Allred said, “We’re going to have a big sale, probably over the next 3-4 months. We’ve been talking to a fellow who’s an auctioneer; we’re probably going to let him do an auction for it.”

They plan to live in the building for a while after it is sold, but “we’re going to be looking for a house in the country with the trees and the birds,” Allred said.