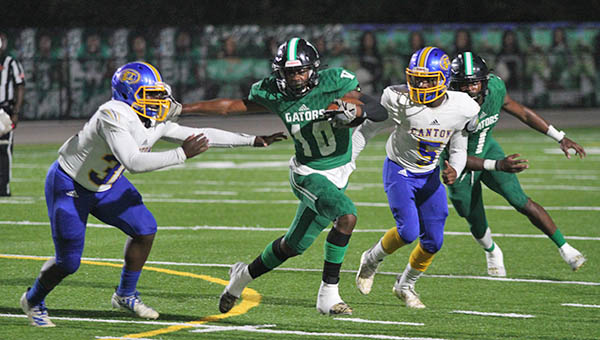 To reach the heights they eventually want to get to, Vicksburg High coach Todd McDaniel says his Gators need to learn how to play a full 48 minutes of football.

On Thursday night, 24 and change was good enough.

Sha’Kori Regan rushed for 106 yards and four touchdowns, and the Gators rode a third-quarter surge and an outstanding defensive effort to a 36-20 victory over Canton.

The Gators (2-6, 2-3 MHSAA Region 2-5A) scored two touchdowns in the first quarter, and then three more in the first 13 minutes of the second half to put Canton (2-5, 1-4) away and keep their playoff hopes alive.

“They’ve been fighting the whole year, and I knew they would come out with a different attitude,” McDaniel said. “My thing was, we have shown growth all year but we have to learn how to play 48 minutes. We came out great the first quarter, horrible second quarter, great third quarter and we kind of lapsed the fourth quarter. We’ve got to learn how to fight for four quarters. We just can’t turn it on and off.”

Vicksburg will have an open date next week — and will officially pick up a forfeit win over Callaway, which opted out of the season because of COVID-19 concerns — before finishing the regular season Nov. 6 at Holmes County Central. Vicksburg must win that game and get some help from other teams to reach the MHSAA Class 5A playoffs.

“It’s much better to wake up on a Friday or Saturday morning with a win than a loss,” McDaniel said. “It’s a confidence-builder. We’ve still got a shot at the playoffs. We’ve just got to win one and we’re in.”

Canton ran four offensive plays in the first 12:07 of the game, but scored two touchdowns. The Tigers returned the opening kickoff 78 yards for a touchdown, and then converted a fumble into a 30-yard TD pass from Jacobian Morgan to Tyquan Henderson to tie the game at 14 on the first play of the second quarter.

Regan had scored twice, on runs of 2 yards and 1 yard, in the first quarter. The Gators then had one first down and 21 total yards on two possessions in the second quarter.

A muffed punt later in the second quarter set up a 9-yard TD run by Ashton Rose that sent the Tigers into halftime with a 20-14 lead.

That was all they got, however. Canton did not score in the second half and finished with 132 yards of total offense. The Gators registered three sacks, including two by junior linebacker Demarion Robinson.

The offense, meanwhile, got on track in the third quarter.

Regan carried the ball 10 times on a 12-play, 60-yard touchdown drive to open the period. Canton fumbled on the next play, and the Gators scored on their next one as freshman quarterback Ronnie Alexander hit Keveon Smith for a 22-yard TD pass.

Smith fell down as he fought with the cornerback, and caught the ball while laying on his back in the end zone. Vicksburg’s two touchdowns came in a span of 17 seconds.

“All I saw was the ball was in the air and I’ve got to do something to get a catch and get on in. I was just amazed,” Smith said.

Smith added a 32-yard reception to set up a 2-yard TD run by Regan on the Gators’ next possession. Chris Williams’ PAT made it 36-20 with 11:16 left in the game, and Canton never seriously threatened to get back in it down the stretch.

“Coach came in and gave us a speech and said we’ve got to go out there and do it or we’d be out of the playoffs,” Smith said. “So we did what we had to do and got on about our business.”