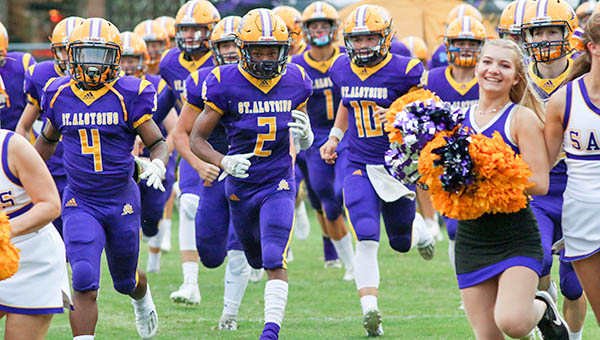 St. Aloysius football players and cheerleaders run onto the field before a game earlier this season. The Flashes will go on the road Friday to play archrival Cathedral in Natchez. (Walter Frazier/For The Vicksburg Post)

It has been, to say the least, a strange season for the St. Aloysius Flashes.
One loss was flipped to a win two weeks after the fact. Another victory was added because of a COVID-19 forfeit. They scored one touchdown in the first half of the season, and now are scoring them in bunches.

Perhaps the most bizarre development, however, has been the team’s reversal of fortune. They’ve won two of their last three games after a rough start, and are headed to the MAIS Class 5A playoffs next week.

St. Al (4-5) still has one bit of business left to clean up before that, when it goes to Natchez on Friday to take on archrival Cathedral (8-1) in the regular-season finale.

“It’s not how you start, it’s how you finish,” St. Al head coach Stacy Sizemore said with a laugh. “It’s been good that we’ve had success later on, and I think we can build on that going into the offseason.”

No matter the outcome Friday, Sizemore said he’s been very pleased with the way his team turned the season around. The Flashes earned forfeit wins over Hartfield Academy and Central Hinds in the first three games, but only scored one touchdown and 12 points in their first six outings.

Then, on Oct. 2, the Flashes crushed Silliman 38-0 to start a late-season surge. They’ve scored 104 points in the last three games, won twice, and are tied for 10th in the MAIS power point rankings that determine playoff berths and seeding. Twelve teams make the playoffs, and St. Al appears to have secured its spot heading into the final week of the season.

“We were young up front to begin with. As the season has gone on, they started to gather experience and have something to build on,” Sizemore said. “The coaches are doing a good job of game planning, and the kids were able to go out and execute.”

St. Al’s result Friday night, as well as a few others around the MAIS, will determine its first-round playoff opponent. The Flashes could finish as anything from the No. 9-12 seed.
Just as important is the bragging rights and momentum gained from beating Cathedral, St. Al’s biggest rival and a contender in Class 4A.

“Not only from the standpoint of the playoffs, but it’s a big rivalry for St. Al. So we’re approaching it as a big game,” Sizemore said, adding with a laugh, “(Athletic director) Mike Jones said we want to win this one. That’s no pressure. I want the kids to focus not on everything that goes on outside this rivalry. I want to focus on the opportunity that we have.”

Cathedral did not have a winning record from 2016-18, but finished 7-5 in 2019 and has enjoyed a resurgence this year. The Green Wave’s only loss was a 37-8 setback to Riverfield Academy in September, and it has outscored its opponents 130-21 in three consecutive victories since then.

Sophomore quarterback Noah Russ has thrown for 1,316 yards and 15 touchdowns, while senior running back Bryson Moore has 1,216 rushing yards and 16 TDs. Wide receiver Christian Wright has 55 receptions for 894 yards and 11 touchdowns.

“They’re playing well in all three phases of the game,” Sizemore said. “(Wright and Harper Jones) are two big receivers. They’re able to throw the ball and can protect, and then you turn around and they have a 1,200-yard tailback. You go into the game thinking, ‘What do I want to take away?’ and then they’re able to do the other thing really well. It presents some challenges for us.”