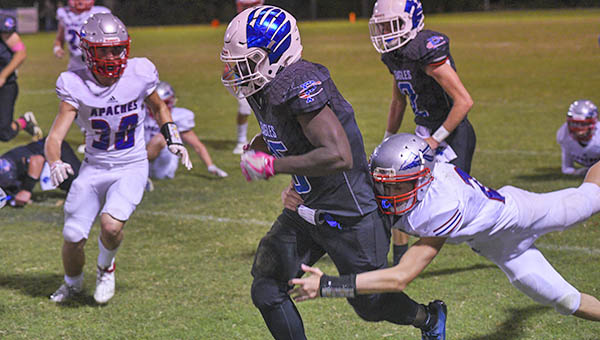 There are 17 teams in the Mid-South Association of Independent Schools’ Class 3A division, and dozens more playoff scenarios and storylines heading into the final week of the regular season.

At least a few of those end with Porter’s Chapel Academy advancing to the postseason, and all of them have one common element — the Eagles (4-5, 0-2 District 3-4A) must win Friday night when they go on the road to play three-time defending Class 3A champion Greenville-St. Joseph (6-1, 1-1).

The MAIS uses a power points formula to determine its playoff brackets and seeding. Twelve of the 17 teams in Class 3A will advance to the postseason — four district champions and eight wild cards — and Porter’s Chapel is currently ranked 15th in the power points standings.

A win over a powerhouse team like Greenville-St. Joe, however, could vault the Eagles into contention for the 12th and final spot in the bracket if a few other results go their way.

No matter what happens, Purvis said, it’s refreshing to head into the regular-season finale with something to play for. This is only the second time in the last seven seasons that the Eagles have gone into their final game with a chance to finish .500 or better. PCA has not reached the playoffs since 2014.

“I told the guys (Monday) that we’ve got more to play for in Week 10 than any team at Porter’s Chapel since 2009 or ’10. We’re still alive,” Purvis said. “In a situation like ours, and you’re in late October and still have games that mean something, that’s a plus.”

Beating Greenville-St. Joe will not be easy, Purvis added, but it’s not impossible either. The Irish are 63-8 since joining the MAIS in 2015, won state championships in 2017, 2018 and 2019, and have only lost once this season — a 50-7 blowout against Greenville Christian, which received a number of public school transfers and transformed itself into a championship favorite overnight.

Greenville-St. Joe lost quarterback Mekhi Norris to an injury earlier this season, however. With Norris, it was averaging 36 points per game. Without him, the Irish have averaged 25 per game.

Several other starters are also expected to miss Friday’s game. Purvis said the Irish have plenty of depth and experience to overcome the losses, but was hopeful their absence might level the playing field.

“Their depth has taken a hit, but you can’t underestimate them. They are still the defending 3A state champion and have lost one game the last three years,” Purvis said. “They are a winning program, and all of that is as much a factor as the guys on the field. That’s the point we’re still building in our program, is the mental aspect of the game.”

PCA is dealing with its own injury issues. Two starters are definitely out, Purvis said, and two more are questionable. The bigger obstacle is believing they can take down one of Class 3A’s big dogs.

“It’s a mental game,” Purvis said. “You’ve got to believe in your team, your teammates and the plan, and trust in your preparation, and don’t be beat before kickoff.”