Cathedral, rain flood out the Flashes 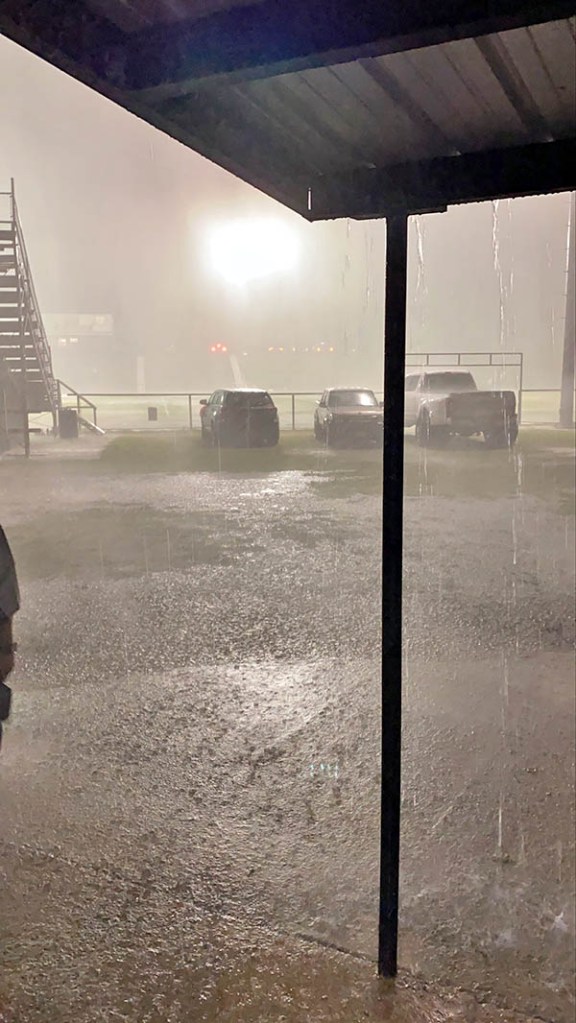 Flooding rain swamps a parking lot at Cathedral’s D’Everaux Stadium Friday night in Natchez. A heavy thunderstorm brought an early end to the game between Cathedral and St. Al. (Submitted to The Vicksburg Post)

In a most bizarre regular season, the St. Aloysius Flashes finished it in an appropriately strange fashion.

A heavy thunderstorm that flooded the field and showed no signs of letting up brought an early end to the Flashes’ rivalry game against Cathedral Friday night in Natchez. Cathedral was leading 35-7 in the second quarter when play was halted, but St. Al agreed to give the Green Wave a forfeit victory so it will go in the record books as an 18-0 defeat.

“I’ve never seen anything like that with the rain except for a hurricane,” St. Al coach Stacy Sizemore said.

It was the third time in 10 games this season that St. Al will have a forfeit on the books — and for the third different reason.

St. Al (4-6) earned a forfeit victory in its opener, despite losing the actual game 43-0, because Hartfield Academy used an ineligible player. Two weeks later, the Flashes got another win because of a COVID-19 outbreak that prevented Central Hinds from playing.

Friday’s forfeit was the first one it has been on the wrong side of. Brennan Williams returned a kickoff 85 yards for St. Al’s only touchdown, and Cathedral otherwise dominated the game.
Cathedral (9-1) scored 28 points in the first quarter, and Bryson Moore had four TDs.

“They were a very good football team. We made some mistakes early, and against a good team they will take advantage of it,” Sizemore said.

Despite the loss — and thanks in large part to the two forfeit wins earlier in the season — St. Al’s season is not over. It qualified for the MAIS Class 5A playoffs and will go on the road next Friday night for a first-round game. The brackets will be announced Saturday because some games were not completed Friday.