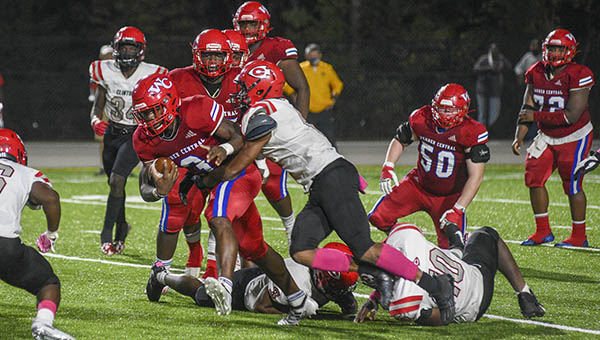 Warren Central’s Timothy Thompson (3) carries the ball during Friday against Clinton. Warren Central only had 224 yards of total offense and lost for the first time this season, 31-16.(Courtland Wells/The Vicksburg Post)

Warren Central kept giving Clinton short fields in the second half and, as a result, found itself on the short end of the score for the first time this season.

Clinton quarterback Caleb Miller ran for 109 yards and two touchdowns, and threw for 107 yards and another score as the Arrows handed Warren Central its first loss of the season, 31-16 Friday night.

Clinton scored 31 straight points after falling behind in the first half. All four of its touchdown drives covered 55 yards or less, and the Arrows only had five offensive snaps in the second half on their side of the 50-yard line.

“That’s how we’ve been winning,” Warren Central coach Josh Morgan said. “The last series of the first half they stayed on the field and converted some third downs that kept them going. We stayed on the field a long time defensively. I think we got tired. But it was really big, the third-down conversions.”

Warren Central (7-1, 4-1 Region 2-6A) missed a chance to clinch its first outright region championship since 2004, but is still alive to do it. The Vikings need to beat South Panola next week at home, and then have Starkville defeat Clinton on Nov. 6.

Clinton (4-2, 4-1) can win the Region 2-6A championship by beating Starkville. It has an open date next week.

The Warren Central-South Panola game was moved up one week to Oct. 30 because both teams had open dates next week.

“It’s disappointing. I’d be telling you a story if I told you otherwise. We really wanted this and the kids really wanted it,” Morgan said. “But stuff like this can make you or break you. If we’re better from it, then that’s what we plan on doing. We’ve still got a lot in front of us, and our mindset is going to be getting better, getting after it, and seeing if it can make us a better football team.”

Warren Central controlled the first half. Kentrick Thompson threw a 63-yard touchdown pass to Antwaun Calvin and Josh Griffin made a 25-yard field goal to give the Vikings a 10-0 lead with 8:07 left in the second quarter.

Clinton got its first points on a 20-yard field goal by Price Nixon on the final play of the half, and then used a huge special teams play to fully seize momentum early in the third quarter.

The Arrows took the second half kickoff and got just across midfield before punting. Warren Central’s Tevin Bell called for a fair catch at his own 15-yard line and appeared to be hit as caught the ball, but no penalty was called. Bell dropped the ball, Clinton recovered, and Miller scored the tying touchdown on a 9-yard run three plays later.

The muffed punt proved to be the turning point of the game. On Clinton’s next series, Miller threw a pass to Jordyn Battee that Battee fumbled at the 1-yard line and Michael Hughes fell on in the end zone for the go-ahead touchdown.

In the fourth quarter, Miller ran for a 3-yard TD and Montavious Warren had a 9-yard TD run as the Arrows extended their lead to 31-10 with 5:16 remaining.

Warren Central got a late touchdown on a 12-yard run by Tre Hall, and had a chance to pull closer after a Clinton fumble with less than two minutes to go. Thompson threw an interception in the red zone, with 50 seconds left, however, and the Arrows took a knee to run out the clock.

Thompson finished 8-of-13 passing for 136 yards, with one touchdown and two interceptions. The Vikings only had 224 yards of total offense.

“I thought we had a good first half. Everything was going pretty good and we were playing well defensively. The second half, really the big thing was the dadgum fumbled punt. I still don’t understand why they called it a muffed punt. It got them going and they really had momentum the rest of the half,” Morgan said. “We lost field position. We were starting drives on the 1, starting drives in the end zone, we were bad punting the ball. From then on it was really a big momentum swing. (Clinton) made a lot of those breaks themselves.”