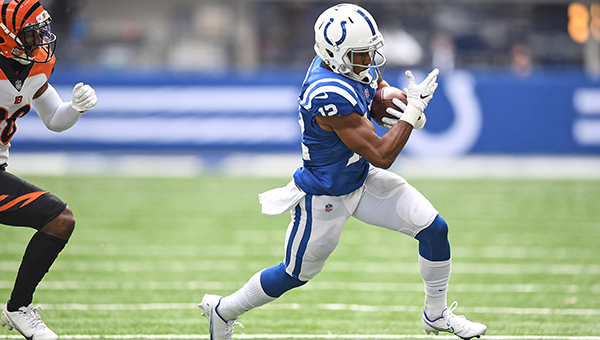 Indianapolis Colts wide receiver DeMichael Harris, a Vicksburg native, runs with the football after making a catch against Cincinnati on Oct. 18. Harris caught three passes for 29 yards in the game, which was his NFL debut. (Courtesy of the Indianapolis Colts)

DeMichael Harris looked at the quarterback, a guy whose NFL career began about the same time Harris played his first game at the Vicksburg YMCA, and had a million thoughts race through his mind.

The play call. The adjustment. His assignment. Most of all, the thought that this was it. More than 15 years of football, of grinding through thousands of practice reps and dozens of games, had led to this moment. The ball was coming to him, and he was about to make the first catch of his NFL career.

“We were in another play before Phillip (Rivers) checked to the screen. We had a screen call in for the nickel blitz, and the nickel that was covering me was giving body language that he was about to blitz,” Harris said. “So Phillip got the check in, and as soon as he gave the check I knew 100 percent the ball was coming to me. It was like, ‘OK, here we go, it’s definitely coming to me. Let’s roll.”

At the snap, Harris executed his part on a screen pass, and picked up 13 yards to give the Indianapolis Colts a first down. Even though it led to a touchdown later in the drive, it was a small and largely forgotten part of the Colts’ comeback from a 21-0 deficit to win 31-27 against the Cincinnati Bengals on Oct. 15.

For Harris, though, it was the culmination of a long journey that started on the YMCA fields in Vicksburg, continued in high school at St. Aloysius and in college at Hinds and Southern Miss, and finally led to the big stage of Lucas Oil Stadium in Indianapolis.

GETTING THE CALL UP
Harris was a two-time Vicksburg Post Offensive Player of the Year in Warren County when he rushed for 3,689 yards and 47 touchdowns at St. Aloysius in 2014 and 2015. He went on to have a solid college career at Hinds Community College and Southern Miss, and signed with the Colts as an undrafted free agent in April.

Harris was cut at the end of training camp in September, but the Colts signed him to the practice squad the next day. His job was to play against the team’s first-string defense in practice and simulate the offense of that week’s opponent.

Harris was good in the role. He was named the practice squad player of the week twice. Because of COVID-19 issues players can move between the practice squad and 53-man active roster more liberally than in years past, so Harris thought he might eventually get a call up.

“On the practice squad we give the ones a look, and I felt like I was doing an awesome job of giving those guys a look. In the first five weeks, two of the weeks I had received the practice squad player of the week,” Harris said. “Me and my dad were talking and saying if this keeps happening, it’s only a matter of time before they bump me up.”

Harris’ first indication that his chance was coming came early in the week before the game against the Bengals. Instead of working against the defensive starters, he was on the field with the first-team offense.

“I kind of noticed that they had me in the game plan with the ones. I was running with Phillip Rivers and those guys,” Harris said, referring to the Colts’ starting quarterback and a 16-year NFL veteran. “Usually on the practice squad I don’t get any reps or anything like that, so when I was actually getting reps with the ones I was thinking maybe I’ll see some action this week.”

Harris’ suspicions were confirmed that Wednesday. Just before practice, with no fanfare, the Colts’ coaches informed him that he would indeed be elevated to the 53-man active roster against the Bengals. Just like that, he was about to join football’s most elite fraternity by playing in an NFL game.

“They told me Wednesday morning before practice. The first person I called was my dad,” Harris said. “It was crazy. I was running all across my head. I’m fixing to have a perfect practice for the rest of the week. But then I have to sit down and think to myself that I have to do what I’ve been doing to get to this point.”

PICKING A NUMBER
Harris’ ascension to the main roster raised some eyebrows in Indianapolis — not because he was viewed as a rising star or replacing an established veteran, but because of the number he wore.

Harris was wearing his old high school number, 5, while on the practice squad, but that is not an eligible number for a wide receiver in a game. NFL receivers must wear a number from 10-19, or 80-89. His college number, 18, was worn by legendary quarterback Peyton Manning and was retired by the Colts in 2017.

The only other receiver number that was available was 12, which was most recently worn by former quarterback Andrew Luck, who is a beloved figure among Colts fans. No one has worn the number since Luck retired in 2019. Giving Harris the number did not go unnoticed by Colts fans, but he said it was a coincidence.

“That’s the only eligible number for a receiver to wear on our roster. The rest of the numbers are either retired or they’re already being worn,” Harris said. “At the end of the day, I understand Andrew Luck was a great player but I guess it’s my turn to run the 12.”

GAME DAY
After he slipped on his jersey, the magnitude of the moment started to dawn on Harris. This was only a relatively meaningless early-season game to most people, but for him it was something he’d been working his entire life for.

“Right when I got done with warm-ups and we ran out, I ran through the tunnel and that’s when it hit me,” Harris said.

Harris did not start, and wound up playing on only 12 of the Colts’ offensive snaps, plus six more on special teams. His first NFL play came on the Colts’ second drive of the game. Harris was not the primary target on a passing play, and said the action went by in a blur.

“I had the motion on the play, and it was a pass play. By the time I turned around and looked back for the ball, Phillip had already threw it,” Harris said. “I was not so much nervous. Definitely excited. Just ready to make the most of the opportunities that came my way.”

As the game went on, Harris got more comfortable. He caught his first pass on a screen play in the second quarter, and added a 10-yard reception in the third quarter and a 6-yarder in the fourth to finish with three receptions for 29 yards.

It was a modest stat line, but all three receptions came on scoring drives as the Colts overcame a 21-point deficit to win 31-27. Sprinkling a few key catches throughout the game that helped his team win, Harris said, made it an even more memorable day.

“I feel like I contributed. It wasn’t just garbage time plays. It was plays that meant the difference in the game. I felt great that they had the confidence and trust in me to do that,” he said. “I wasn’t trying to put too much pressure on myself. It was more of, ‘Just make these plays that you make every day in practice.’”

WHAT’S NEXT?
Harris will have to wait and see if his NFL debut turns into more than just a one-off appearance.

Players on the practice squad can be activated three times before they have to be signed and placed on the 53-man roster permanently, so his playing status will remain week-to-week. The Colts had a bye last week and will next play this Sunday at Detroit.

Decisions on whether to activate practice squad players are usually made on Wednesday or Thursday, depending on the team’s needs. The Colts had seven wide receivers on the 53-man roster against the Bengals, and teams usually have six or seven active for a game.

“It’s a week-by-week thing. They really haven’t said anything to me. I think they can bump me up for three games before they have to permanently sign me to the 53-man roster,” Harris said. “It’s a waiting game right now. I’m happy with how I performed. I showed what I can do and put my speed on tape. I’m ready for whatever happens next.”

Whatever does happen next, Harris said he’s elated to reach a level he’s strived for and dreamed of since the first time he touched a football. He’s no longer a former high school star, or a college standout. He’s a player in the National Football League.

“It’s very cool. I can’t even describe it,” Harris said. “It’s a blessing. All of the hard work paying off and being able to shine in that moment.”

Four Down Territory: Region 2-6A is up for grabs, Regan is running wild, and Black hits a milestone

You’re in Four Down Territory. Each week we’ll examine four notes, nuggets, stats and trends from the weekend that was... read more