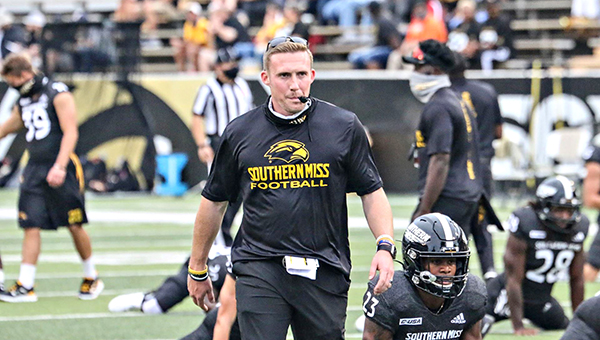 HATTIESBURG — For the second time this season, Southern Miss is dealing with the sudden resignation of its football head coach.

Scotty Walden, who has served as Southern Miss’ interim head coach since Sept. 7, announced Tuesday that he is stepping down to become the head coach at Austin Peay.
Walden went 1-2 during his brief and bizarre stint leading USM’s program. He became the interim head coach when Vicksburg native Jay Hopson resigned after a loss to South Alabama in the season opener.

Southern Miss had to postpone two games earlier this month because of COVID-19 issues, and then Walden himself tested positive last week and did not make the trip to Virginia when the Golden Eagles played Liberty.

Walden joined Southern Miss’ coaching staff in 2017. The 30-year-old will be the youngest head coach at the Division I level. Austin Peay announced his hire Tuesday, and will officially introduce him at a press conference on Nov. 2.

Austin Peay, which plays in the Football Championship Subdivision, is playing split seasons. The school played three games this fall with Marquase Lovings as interim coach and went 0-3 against Central Arkansas, Pittsburgh and Cincinnati. Walden will lead them into the scheduled spring season in the Ohio Valley Conference, which starts Feb. 21.

“Becoming the head football coach for an up-and-coming program like Austin Peay is a dream come true for myself and my family,” Walden said in a release. “I am looking forward to meeting the players and getting to work as soon as possible. We appreciate (Interim APSU President) Danelle Whiteside, (Director of Athletics) Gerald Harrison and the entire Austin Peay community for the amazing opportunity and belief in us.”

Southern Miss (1-4, 1-1 Conference USA) is scheduled to play Rice this Saturday at 2 p.m. in Hattiesburg, and has five games remaining in the season.

Billings has been a member of the Southern Miss staff since 2016. The 41-year coaching veteran has worked previously as an assistant at Missouri, Oklahoma, Marshall, Wake Forest and Memphis, and was the head coach at Southeast Missouri State from 2000-05.

“We are excited for Scotty and his family as they begin this new journey and we wish them nothing but the best,” Southern Miss Director of Athletics Jeremy McClain said in a statement. “As we adjust, I have asked Tim Billings to take over the interim head coach role and I have full confidence in his ability to successfully lead our team for the rest of the season.”