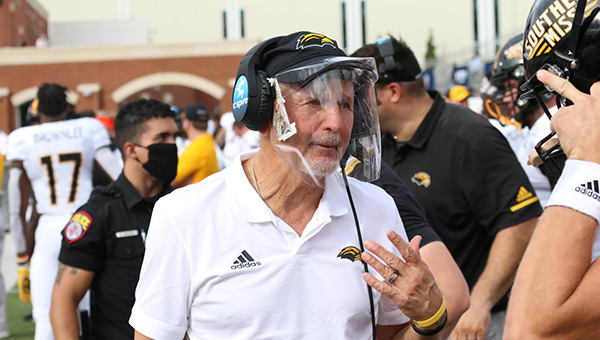 Tim Billings, an assistant coach at Southern Miss since 2016, was promoted to interim head coach earlier this week. He will lead the Golden Eagles against Rice Saturday at 2 p.m. in Hattiesburg. (Southern Miss Athletics)

For more than 40 years Tim Billings has worked in the background at a half-dozen college football programs. Except for a six-year stint as the head coach at Southeast Missouri State in the early 2000s, he has been an assistant his entire career and seemed quite happy to continue on that path at Southern Miss.

Fate, though, is forcing him into the spotlight.

Billings became the second person this season to hold the title of interim head coach at Southern Miss when Scotty Walden resigned on Tuesday to become the head coach at Austin Peay.

Billings knows it’s a temporary position, and isn’t one he seems particularly interested in holding on a full-time basis. With five games left in the season and the Golden Eagles still alive for the Conference USA championship, however, he’s not planning to coast to the finish, either.

“Earlier in life, you’re excited about being a head coach. You’re like, ‘This is a steppingstone to the next head coaching job.’ This is totally different. I’m excited and proud to be the head coach at Southern Miss. My wife and I love Hattiesburg. We might end up retiring here some day,” Billings said in a conference call with media on Tuesday. “But I know that I’m not going to be the next head coach here and that’s fine. I hope they pick a great head coach for these young men. They need it. I’m just here to hopefully improve what we have here now and keep our tradition alive. We brought these young men here to win football games and championships. That’s our goal, and that’s what we’re going to try to do until they decide who our next head coach is.”

Billings is the third head coach Southern Miss has had this season. Vicksburg native Jay Hopson resigned after coaching the season opener in September, and then Walden took over for the next three games before bolting for Austin Peay.

Billings actually made his debut last Saturday in a 56-35 loss to Liberty, although he didn’t realize it at the time. He was filling in for Walden, who tested positive for COVID-19 last week and did not make the trip to Virginia.

“I fired myself Saturday after the game and I got rehired,” Billings joked.

Billings is a familiar face in the Southern Miss program. He was hired as the outside linebackers coach in 2016 and promoted to defensive coordinator the following year. He was serving as assistant head coach and tight ends coach this season.

He said he was reluctant to step into the head coach job, but hoped to bring some stability to a chaotic season. Besides the coaching turnover, Southern Miss has had two games postponed in October because of COVID-19 issues.

“I had to think about it, because this wasn’t what I wanted to do or be. But these kids and guys, with all the work they’ve done, if I’m the guy to lead them then I’ll do the best I can,” Billings said. “One thing is just be me. I’m the only guy that’s left that’s been here the whole time. I think that gives them some continuity and stability. I’m going to try to keep the program the way it’s been and have as little change as possible. They don’t need any more change than what they’ve gone through.”

Southern Miss (1-4, 1-1 Conference USA) will play its second game with Billings in charge this Saturday in Hattiesburg when it takes on Rice (0-1, 0-1). Despite the Golden Eagles’ bad start, they are still in position to win C-USA’s West Division if they win the remainder of their games.

It will require a major turnaround with a defense allowing an average of 43.2 points per game, and that was torched for seven touchdown passes against Liberty. But in a crazy year, Billings said, crazy things are not impossible to imagine.

“We’ve got to win one. If we can win one, we can win two. Before you know it, we’re on a little roll,” Billings said. “We’ve got a chance these next few weeks to gain some confidence and some stability. Who’s to say at the end of the year, we might not be playing for a championship? It’s still possible and it gives us hope. At least we still have goals and aspirations.”