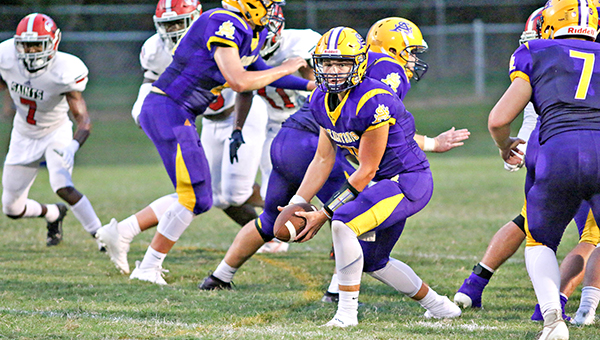 All season long, through the twists and turns, highs and lows, St. Aloysius coach Stacy Sizemore has insisted he’s looking down the road and not at any one result. In that sense, this week offers another chance to take a step toward a brighter future.

The question for the Flashes is whether it’s the last one they’ll take in 2020.

St. Al (4-6) goes on the road Friday to play Pillow Academy (7-3) in the first round of the MAIS Class 5A playoffs. It’s a do-or-die game to extend the season, but Sizemore said he’s taking it as a valuable step to eventually build a successful program rather than the start of an underdog championship run.

“It’s another week we get to practice and get better, and build on what we did this season. It’s another chance to get better. Another four or five days to build on the momentum we’ve built over the last few games,” Sizemore said. “We’re just approaching it like any other game in the regular season. I’m more concerned about our guys than the other team. We’re still working on the fundamentals and trying to get better.”

Just reaching this point has been a remarkable accomplishment for St. Al, considering where it started.

The Flashes scored a total of 12 points and one touchdown in August and September, yet went 2-4 over their first six games thanks to two forfeit victories. Hartfield Academy used an ineligible player in its 43-0 rout of the Flashes in the season opener, and Central Hinds was unable to play because of a COVID-19 outbreak.

Things turned around dramatically in October, as St. Al won two of its last four games to earn a playoff berth for the seventh time in eight years. The offense averaged 34.6 points over a three-game stretch before struggling last week at Cathedral.

St. Al forfeited the game to Cathedral when a heavy thunderstorm flooded the field at D’Everaux Stadium in Natchez midway through the second quarter. With his team already trailing 35-7, Sizemore elected to call it a night and head home rather than wait out a long weather delay.

It was the latest strange wrinkle in a season full of them. The Flashes have avoided any COVID-19 issues, but still have been involved in three forfeits for three different reasons.

“It’s nothing that any of us have ever been through. It’s being flexible and not worrying about the things you can’t control,” Sizemore said. “It has been a very rollercoaster season. You don’t know from day to day what’s going to happen, who’s going to be here, who’s going to the doctor. Used to be if a kid had a fever you’d send him home and wait for him to get better. Now you don’t know what that will turn into. It’s a lot of variables.”

Playing Pillow Academy is also a new experience for St. Al. It’s the first time the teams have ever faced each other.

Pillow has three state championships on its resumé — the last in 2010 — and has won at least one playoff game in each of the last two seasons. It enters the postseason on a three-game winning streak, and Sizemore said he’s a fan.

“They’re fun to watch on film because they play the game the way it’s supposed to be played,” Sizemore said.

Unfortunately, Sizemore and the Flashes need to find a way to beat the Mustangs. That’s where his fandom subsides and reality sets in, and he says it becomes a tough matchup. Pillow features a run-heavy offense that averages 284.5 rushing yards per game. Seven players have at least 100 yards this season. It’s the kind of offense that has given the Flashes trouble this season, and might not bode well for their chances of winning a playoff game for the first time since 2015.

“It’s a difficult matchup,” Sizemore said. “We’re in that same thing we’ve been in the past. We’re undersized, they have good depth, and it’s a difficult task for us. We’re going to go in prepared and do the best we can, and see what happens.”