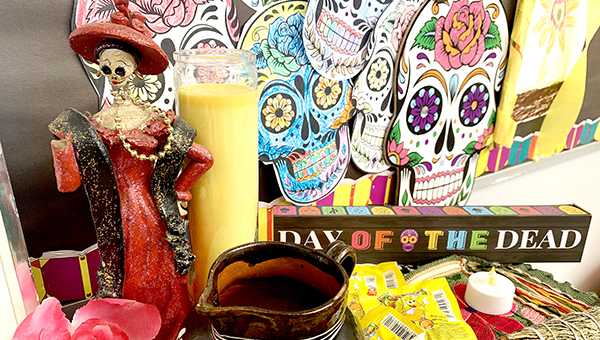 Second-grade students at Beechwood Elementary have had fun learning about another culture’s traditions.

They created art, made sugar skulls and on Friday watched, “Coco,” a Disney Pixar movie that was inspired by the Mexican holiday Day of the Dead.

“Day of the Dead started as an Aztec tradition and is now celebrated throughout Latin America and the Latin America diaspora,” Beechwood second grade teacher Graciela Breece said.

Breece, who is Mexican and Czech, has lived all over the U.S. and world. She said she has always made it her goal, regardless of where she has lived, to expose her students to as many cultures as she can.

“It is important to learn about others’ traditions and even language to break down barriers of misunderstanding,” she said.

Breece has not been alone in exposing her students to other cultures. Breece’s fellow second-grade teachers Heather Baxley, Melissa Hughs and Shannon Hall, also had their students join in on learning about the holiday.

Dia de Los Muertos, which is Spanish for “Day of the Dead,” is an official two-day holiday in Mexico beginning Nov. 1.

“The first day is called Dia de Los Santos, which is dedicated to the children that have passed,” Breece said. “I will be remembering Kealen Andrews on this day.”

Kealen, who was in Breece’s kindergarten class, died in October after a fire broke out in his home.

The second day of the holiday is for the adults.

“It is believed that on those days, the boundary between the living and the dead is the thinnest. The celebration is dedicated to remembering those we have lost and celebrating their lives,” Breece said. “Pictures, favorite candy, favorite drinks and possessions — things they loved most — are placed on a table or platform called an ofrenda, which is decorated to remember the loved ones and celebrate their time living.”

In addition to decorating the Calaveras — sugar skulls — and learning about the holiday as a celebration and remembrance of their loved ones who have died, Breece said they also read stories about the Day of the Dead and complete projects, such as making papel picado — Mexican decorations made paper marigolds.

“Throughout the last couple of weeks, students have also been bringing in pictures of their loved ones to place on the ofrenda so that they can celebrate and honor that person’s life,” she said.

Breece had many questions from her students about Day of the Dead, she said, including whether animals remembered on the holiday.

“Animals become a very important part of the family and are remembered as well during this holiday,” she said.

Second-grade student Harrison Hendrix was glad to hear this. On Day of the Dead, Hendrix said, “I will be thinking about Salt and Pepper, my puppies. Pepper liked playing fetch and Salt liked getting his belly rubbed.”

Another question posed to Breece from the students was about the skeletons being scary.

“I love this one because it gives adults a chance to dispel the fear of death for children,” Breece said. “My response is we are all skeletons, it holds our bodies together and the overt skeletons represent the next phase of our lives.”

One of the most iconic symbols of Day of the Dead is that of a dressed skeleton.

“Mexican artist Jose Guadalupe Posada etched ‘La Calavera Catrina’ in 1910. It is of a high-society skeleton woman dressed in a fancy European hat and dress,” Breece said. “It was meant as a political satire that the upper-class dress and money don’t matter because everyone is equal in death.”

Friday, the students held a celebration where each was given the chance to talk about a loved one they wanted to celebrate and what they loved, as well as any special memory they had of them.

Second-grade student Drake Tillotson remembered some of his family members.

“I will be thinking about my people Uncle Troy and my Papa. My people like to go boating to catch fish. My Uncle Troy liked to go hunting in the woods at our family farm. My Papa liked to farm at the farm,” he said.

Day of the Dead isn’t a day to be sad, Breece said.

“It is to celebrate the life of that person and everything we loved about them,” she said.