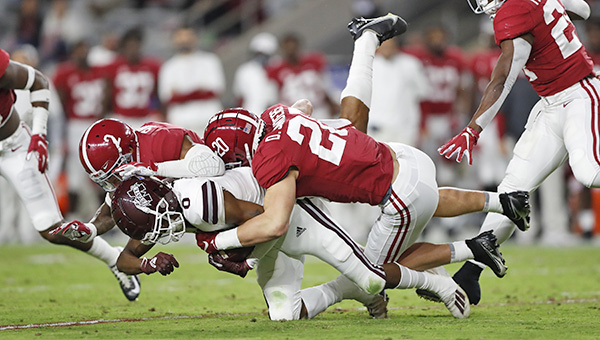 TUSCALOOSA, Ala. (AP) — Mac Jones threw four touchdown passes to DeVonta Smith, who had 203 receiving yards, and No. 2 Alabama cruised to a 41-0 victory over Mississippi State on Saturday night.

The Crimson Tide (6-0) had a dominant defensive performance, handing new Bulldogs coach Mike Leach the first shutout of his college career. It was Alabama’s first shutout since a 24-0 victory over Mississippi State on Nov. 10, 2018.

Smith caught first-quarter touchdowns passes of 35 and 53 yards to help send the Bulldogs (1-4) to their fourth straight loss. Since scoring 44 points in a season-opening win at LSU, the Bulldogs have scored a total of 30 points. The offense has scored one touchdown in the last three games.

Smith took over the starring receiving role in the absence of Jaylen Waddle, lost to a likely season-ending ankle injury. He made 11 catches and moved into a tie with Amari Cooper for the most career receiving touchdowns with No. 31 early in the fourth.

Smith also vaulted over Jerry Jeudy and Calvin Ridley into No. 3 on Alabama’s career receiving yards list with 2,868.

Jones completed 24 of 31 passes for 291 yards before sitting out most of the fourth quarter. Najee Harris gained 119 rushing yards on 21 carries.

Mississippi State quarterback K.J. Costello left after appearing to take a knee to the helmet early in the second quarter. He was escorted to the locker room and replaced by Will Rogers, who was coming off a 15-of-18 performance against Texas A&M.

The nature of Costello’s injury wasn’t immediately disclosed. He finished 4-of-11 for just 16 yards. Rogers completed 24 of 37 passes for 147 yards and threw two interceptions.

Mississippi State mustered only one serious scoring threat. It ended when Dylan Moses intercepted a pass in the end zone late in the third.